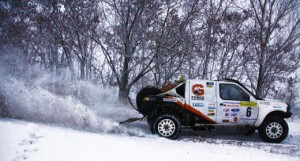 Winter darkness in the Russian countryside is absolute and dawn was only the slow changing of black through a few  shades of grey. The two G-Forces were first off in today’s two stages, their headlights shining off the icy track in front of them… This morning it was Victor Volikov’s turn to be the most spectacular, sliding the tail out into one snow bank which flicked him around to slide into the next. There was no easing off the throttle though and with a beautifully controlled powerslide he headed off into the forest two minutes behind team mate Vladimir Vasiliev. 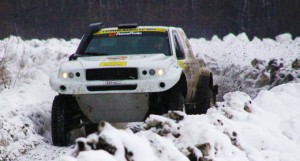 There was no car to ferry the press around so I got a lift with G-Force team owner Boris Gadasin again and we raced off to another vantage point, a sweeping track up the side of a valley under the trees and it was the same story. Vasiliev effortlessly drifted between the banks in controlled, flowing slides while Volikov came stabbing at the gas and throwing it into the corners, sending dirty snow high into the air… Third placed in the FIA spec class, Aldis Vilcans in his T1 Mitsubishi Pajero, was a long way back at CP2, but by the time we got to the finish the cars were parked up in parc ferme in a different order, with the black Mitsubishi between the two G-Forces. Victor wasn’t in the mood for chatting but his co-driving son Anatoly explained that they flew over a jump near the finish a bit too fast and ran out of road to break for the next corner. “It took us 10 minutes to dig ourselves out of the ditch with spades and the sand tracks.” But it wasn’t Vilcans that Volikov lost second place to. The less restricted ‘National’ class was also competing for overall places and Artur Murashkin in his Nissan Pickup started the last stage 1 minute 38 ahead.

It wasn’t a good stage for a few of the other crews featured yesterday either. The Kazakshanis who were leading the T1 class retired with engine failure and the Yoh Mobile also didn’t make it to the end… “There’s a lot of parts and elements that combine electrical and mechanical processes in the drive-train and there was a malfunction with…” one of the team members with the best English tried to explain. We settled on the translation of ‘Teething troubles’. 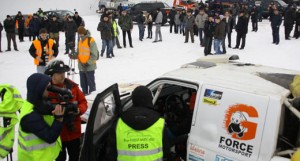 In the regroup before the last stage Vladimir Vasiliev was noticeably more relaxed now that he had an advantage of nearly 12 minutes and handed out home made sausages to the team with a smile. Once again Vasiliev was calm and flowing while just doing enough to protect his lead while Volikov was bashing into the snow banks with abandon in an effort to claw back second place… In the end though his maximum attack wasn’t needed as Murashkin didn’t make it out of the stage… I spent an hour wandering around the Virage carpark and the crowd around the podium, but he still hadn’t made it back and no one knew what had happened. The result was that after waiting nervously in the soggy service park Volikov was a happy man when news came in that Murashkin hadn’t past the final checkpoint. After showing such promise last year Vasiliev tempered his sometime erratic streak and took his first victory while Volikov on his first time behind the wheel of a T1 car took the runner up spot in a commanding G-Force 1-2 .

“I followed the road to get here for a long year and it’s an amazing feeling,” Vasiliev smiled before the podium celebrations. “It was hard to be first on the road as there was 10cm of snow so we were driving a G-Force bulldozer for the first 115km! The next race for us is in Italy and we’ll be there to win!”

Volikov was also in a good mood. “I’m happy to be after my team mate but I hope that next time we can arrange to change the results the other way around! We’ll be taking delivery of a new G-Force Proto in June… I ordered it in September so 9 months… it’s like waiting for a baby! But will be at the 2013 Dakar with it!”

The reigning world T2 champion Ilya Kuznetzov driving his Mitsubishi Pajero, (which is much smaller than his normal Toyota Landcruiser and therefore easier to fit down the narrow tracks) didn’t know if he’d won T2 or not. Andrey and Vladimir Novikov were 5 minutes ahead on the road but were facing exclusion for not wearing HANS devices… “It’s a good race,” he said. “And there’s nothing else like it on the calendar and seeing as there is plenty of sand on the other races every real driver should be interested in coming here to race on the snow!”

One place behind Kuznetzov were my Africa Eco Race friends from the Belgorod off-Road team Maxim Kirpilev and Vadim Shmaylov. A few small problems such as having too much pressures in the tyres and a malfunctioning TerraTrip slowed them but their whole event almost went up in flames… “We almost hit the village gas supply tank,” Maxim laughed. “We slide off and I tried to turn the car so that it would hit on the side… the co-driver’s side, of course.” “It was just a normal day in the office,” his thankless navigator Vadim shrugged.

Last year when they finished 2nd in their almost standard UAZ I was surprised, so 4th place this year didn’t seem so outrageous in a vehicle that is basically a Series 3 Land Rover. “The engine head is skimmed, some points on the chassis are reinforced and the axles are strengthened, but no, it’s a standard UAZ,” said driver Bogdan Vavrenyuk. “It’s not very comfortable inside but it goes like a tank and we’re not afraid to beat it. But the secret of the team is that we have a very skilful mechanic.”

In the restaurant about the carting track a feast was set out and the teams collected their trophies. Some got bigger cheers than others, but happiest of all was Vladimir Vasiliev. When I first saw him in the Hungarian Baja I said that he was one to watch, when he won a stage of the Silk Way rally ahead of names like Peterhansel and Holowzyz I said it was no real surprise and when he was leading the Pharoans Rally in Egypt ahead of Schlesser I said that he was one to watch for the future. He’ll be in Italy in a little over 2 weeks time… Let’s see… 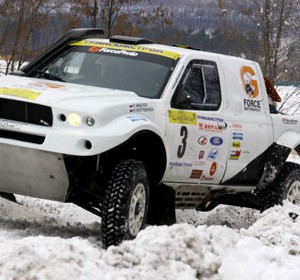 Yesterday the crews had to deal with the bitter winter storm that raged over the prologue in the Virage motorsport centre....
Copyright 2011-2016 Rallyraid.net - RISE Network. All Right Reserved.
Back to top