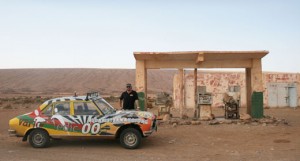 Over 400 participants lined up at start line to kick off the 2012 edition on the Budapest-Bamako. In its seventh consecutive year, the Bamako is the world’s largest amateur marathon rally. Teams came from 35 countries to battle time, distance and elements on this legendary endurance rally. The first obstacle was the brutally cold winter weather in Budapest. The rally’s start gate got blown away by the gusty, icy winds. Improvised gas flames substituted the start gate as the 150 cars, trucks and motorcycles left Budapest’s Hero’s Square.

Teams can enter the Bamako in the more demanding competitive category and the somewhat less difficult touring (raid) category. For the 35 extreme teams that chose the competition, Hungary’s famous off-road track, Somogybabod was the first stop on the 9000 kilometer race. The Bamako is not a timed race. Teams have to reach navigational geo-points and complete daily stages on time. They can collect points for both. The team with the most points after 15 difficult days wins the race. Participants have to endure long distances, keep their vehicle in good condition and be able to navigate in treacherous conditions. Many teams faced technical problems on day one. Some had to stop by the highways of Slovenia to replace entire engines, while others quite the rally later on in the afternoon in Northern Italy.

During the brutally cold European leg of the rally drivers yearned for the warmer African climate. To their dismay Morocco welcomed them with subzero temperatures, snow and ice. The first African off-road specials through the Rif and Atlas mountain ranges had 5-10 centimeters of snow.  After crossing the Atlas, the snowfall turned into a brutal dust storm. “The weather brought everyone down during the first four days of the rally”, said Andrew G. Szabo founder of the rally about the first 4000 kilometers of the race. 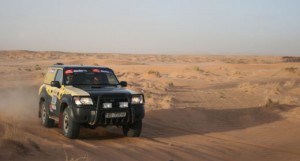 Day five of the Bamako from Derkoua Oasis to Tata was probably the most difficult daily stage of the rally. Teams set out from Derkoua at 4AM under the starry Saharan sky. They had to tackle the dune system of Erg Chebbi in complete darkness. Many teams got bogged down in the sand while others managed to find their way out of the captivity of the dunes. The lucky ones left Erg Chebbi behind by sunrise. The rest of they day held many more difficult moments and rough terrain for everyone. The lead ATV rider, Adam Szepvolgyi got stuck in waste high mud in a river crossing. He was winched out of the calamity by a passing Slovakian race team.

The Budapest-Bamako has managed to preserve its low budget, feel good, party atmosphere over the years. The desert finish line near Abetteh, Morocco conjuring images of Planet Tatooine from Star Wars was the scene of the annual Star Wars party where teams got bonus points if they crossed the daily finish line wearing Star Wars customes. Christopher Banger, who finished the race in third place for example wore a professional Darth Vader costume complete with a mask and sound effects.

Before the rally crossed into Western Sahara cars and motorcycles had to battle the punishing rocky tracks of the Bani Mountains. The tiring ripping narrow mountain tracks destroyed nearly a hundred tires that day. Some teams had to replace 2-3 tires on this stage. “It was 530 killer kilometers. We lost tires and we completely lost our power steering”, said Mila Janacek of the Czech Bamako Team who had sever muscle aches after trying to steer his Subaru on the football sized rocks.

Teams approached the Mauritanian Moroccan border on an old Dakar track from the 1994 Paris-Dakar. The road was specifically built for the Dakar and forgotten since then. “It’s part of motor sport history. It was amazing to drive on this fast 300 kilometer track”, said Conor Byrne of Team USA. 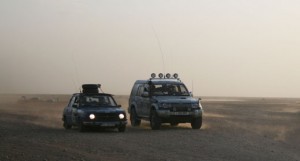 The rally participants managed to cross the land mine strewn military buffer zone between Morocco and Mauritania without incident. The biggest mishap was that a Norwegian quad rider lost his passport, money, visas and all travel documents in the area that is commonly known as no-man’s land. It meant that he could neither enter Mauritania nor return to Morocco. The Norwegian embassy estimated that he could get new documents delivered to the area in 4-5 days. The ingenuity and the can do spirit a Hungarian team saved him from being stranded for days in the desert. They smuggled him into Mauritania and his quad was brought into the country by using a similar vehicle’s documents.

Mauritania’s international image and country’s reputation has been tarnished by Al Qaida kidnappings and murders in recent years. In 2008 the Dakar rally got cancelled because of terrorist activity in Mauritania. The armed forces escorted the rally throughout the country. More tough desert driving, more dunes, beaches, flamingos and another quad rider stuck in mud marked the day. 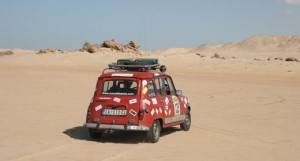 This time several hours were spent trying to drag him out of the soft beach mud. The traditional B2 Beach Party in the Banc D’Arguin National Park awaited the teams with a spectacular sunset, fish barbecues, scattered campfires on a stunning virgin beach. Drivers and navigators exchanged stories by the fires long into the night. The following day everyone could sleep in as the high tide on the beach pushed the start time back to 1PM.

After two more sandy, dusty desert days in Mauritania teams set out to cross the Senegal river at Rosso, one of West Africa’s most dreaded border crossings. This border town is made infamous by travelers’ horror stories of pickpockets, con-men, burglars, prostitutes, beggars and corrupt officials. As if a guardian angel watched over this year’s Budapest-Bamako, the entry into Senegal went on without a hitch. By 10PM all teams checked in at savannah bivouac near Richard Toll.

Authentic African bush landscape awaited the teams on their first full day in Senegal. For the first time in the rally’s history no GPS coordinates were given to the competitors. They had to complete nearly 500 kilometers through the West African wilderness just by village names. For navigation they had to rely on communicating with local shepherds and villagers. Many got lost in the complex web of donkey tracks and narrow dirt roads. Most teams missed the finish deadline during this low-tech navigation day. Only five teams arrived in the village of Velingara by 5PM. 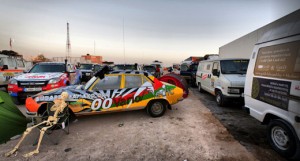 The rally nearly came to an abrupt end in Senegal on the following day. As part of a general strike in Senegal no fuel had been delivered to the countryside for days. Gas stations were out of both petrol and diesel by the time the rally reached the town of Tambakunda. Teams had to rely on their wits and occasionally bribe Malian truck drivers to sell them some Diesel or go into neighboring villages to scour small quantities of black market fuel. Luckily all teams managed to secure enough fuel to reach the Guinea-Bissau border on the following day.

On the last day in Senegal overeager Senegalese national park rangers fired an AK47 machine gun on a passing rally car that failed to notice a jungle checkpoint in the Niokolo Koba National Park. Anxiety reached its high point among the drivers when the park ranger stopped 16 other cars immediately after the incident and held them for more than 2 hours. No one got hurt but the incident just added to the tension that was created by the fuel crisis and 13 tough days on the road. Nerves were calmed and spirits were lifted again after reaching the village of Sincem Boce in Guinea-Bissau, where African drummers, masked dancers, singers and a true African village party greeted the arriving teams.

Sincem Boce was one of the towns where teams gave out some of the 600 000 Euros worth of donations that they have brought to Africa. An entire school got furnished and supplied, medical aid, clothing and children’s toys were distributed in the village of 1200.

The celebration continued on the following day as teams rolled into the capital of Bissau in this tiny former Portuguese colony. Several members of the local government welcomed the rally. After 15 days and 9000 kilometers teams arrived battered, exhausted and dirty, but ecstatically happy. Out of the 150 teams only 102 managed to pass through the finish line. Many are already preparing for the 2013 running of the Budapest-Bamako. 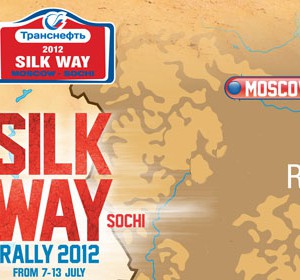 The fourth edition of the Silk Way Rally will take place on the route Moscow - Gelendzhik from 7th till 13th July, 2012. In...
Copyright 2011-2016 Rallyraid.net - RISE Network. All Right Reserved.
Back to top