The 2004 FIA World Cup champion Khalifa Al-Mutaiwei carried out a two-day test session with his new Mini All4 Racing in the UAE desert at the end of last week, only days after announcing his shock return to international cross-country rallying after an eight-year absence. 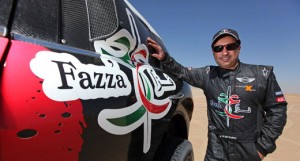 Al-Mutaiwei is teaming up with the German X-raid team this season to campaign the Mini All4 Racing alongside co-driver Andreas Schulz. The car is running under the Fazza Rally Team banner, thanks to the valuable ongoing support of Sheikh Hamdan bin Mohammed bin Rashid Al-Maktoum, crown prince of Dubai.

Al-Mutaiwei was joined at the test by X-raid team director Sven Quandt and the experienced Spanish team driver Joan ‘Nani’ Roma – the runner-up in this year’s Dakar Rally. The first two days of the test were carried out in the Marmum region, which is notorious for its sandy terrain and dunes.

Both drivers shared the same car, fitted with X-raid’s new engine that will be used in cross-country rallying in the future. The engine delivers more power and is fitted with a smaller restrictor, but this powerplant will not be used by Al-Mutaiwei when he drives in competition with the X-raid team for the first time in the Baja Italy later this month.

The Dubai driver is hoping to drive this car for the first time in the Abu Dhabi Desert Challenge, round two of the FIA World Cup for Cross-Country Rallies, at the end of March.

“This is the second time that I have tested the Mini,” enthused Al-Mutaiwei. “The first time was in Spain. That time I was a bit cautious and not really used to it. On this second test I was a bit more familiar with it, although the terrain was much more difficult. It was sandy and demanding.” 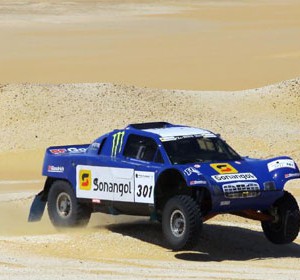 NPO announces the cancellation of the Rally Of Tunisia 2012. With the following press release the organizers of the Tunisian...
Copyright 2011-2016 Rallyraid.net - RISE Network. All Right Reserved.
Back to top