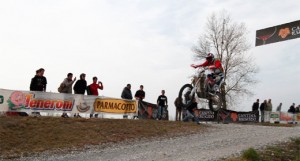 Alberto Basso won both Selective Sections, but the young Oriol Escalé still kept the second position in the general rank, ahead on Alex Zanotti, who went on fighting along the whole track against Jakub Przygonski, seizer of the forth position. Among quads, Oscar Romero still leaded the race, riding almost as fast as bikes

Alberto Basso (Honda Crf 450 – Team BRP), local champion of the Italian Baja and champion in charge, got both experience and talent to keep the good results: after yestarday’s prologue, Basso left the starting line from the fifth position and won both Selective Sections on Saturday with a time of 1:49’51. The young biker Oriol Escalè (HM Crf 450 – Petromiralles Taem), who yesterday surprised everybody and was first at today’s starting order, confirmed his ability seizing twice the second position (SS1 and SS2) with a gap of just 47’’; the expert biker Basso should pay attention to the young Spanish challenger on tomorrow’s final race. Thrilling duel between the two “big”: Alex Zanotti (TM EN 450 – Racing Team), the biker fom San Marino used to the Dakar race, had to ride slowly in the morning because of a broken brake, but was able to easily ride and save time during the second Section, gaining the third position, ahead on the Cross Country Rallies Vice Champion in charge Jakub Przygonski (KTM 450 – Orlem Team); the Polish biker seized the third position during today’s first timekept Section, but reached at the end just the forth position. The fifth position of the general rank has been seized by the quad rider Oscar Romero (KTM 525 – Knightfrank-Quadtro Team) already far away from his challengers and leader of the daily race: the expert Spanish Baja rider got a 8’27 gap from Basso, so fast that public was excited by his high performance. Sixth position for the other young biker Manuel Lucchese (Husaberg Fe 570 – Husaberg Factory Team) who got a 12’16 gap. The seventh position of the general rank has been gained by Gilbert Escalé, Oriol’s brother, followed by Andrea Brunod and by the foreign quad riders Jose Luis Espinosa Garcia (Can Am Autlander 800 – Caballero Negro Team), two of the Russian Team’s companions Dmitry Pavlov and Vadim Kuvshinov (Honda Trx 700 – RRClub-Russia) and the only lady rider Emmanuelle Clair (Yamaha Yfm 700 – Audemar, Yamaha France), who is facing her first Italian Baja quite carefully. Last arrived biker, who got one hour penalty, were Sebastiano Demurtas (Honda Crf 450) and the quad rider Alberto Prieto (Yamaha Yfm 700 – Knightfrank-Quadtro Team), and the American Luis Henderson (Yamaha 450 – Pedrega Team) who broke the engine during the SS1 and wasn’t able to take part to the SS2. 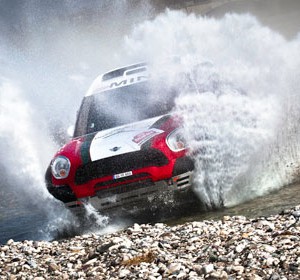