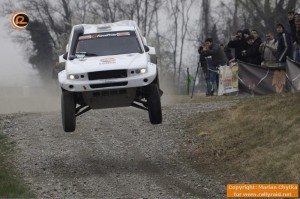 Looking through the entry list for the 19th Italian Baja you’d be forgiven for thinking that this was a Race of Champions. Jean-Louis Schlesser probably needs no introduction; ex-F1 driver, 2-time Dakar winner, 4-time Africa Eco Race winner was in his stunning Schlesser Original Buggy. All the way from Russia was 2-time FIA Baja Champion Boris Gadasin in his 7 litre V8 G-Force Proto, ex-WRC driver Tony Gardermeister was in a Mitsibushi Pajero, Czech Dakar driver Miroslav Zapletal was in his BMW X3XX, current T2 world champion Ilya Kuznetzov stepped up into a gorgeous T1 SAM Mercedes and 2004 FIA Cross-Country Champion Khalifa Al Mutaiwei brought some glamour to this part of Italy in his superstar X-Raid Mini… The winner would be beating some very illustrious names in some very serious machinery!! 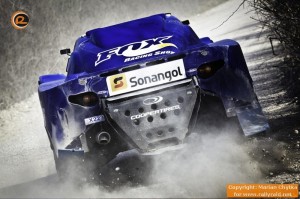 The race centered on 4 runs of an 81km loop up a river bed and along rough tracks around the edges of fields and the long, fast and very rocky river section mixed with lots of short straights and 90 degree corners would be a tough test for the crews… and there were plenty of ditches lining the tracks to catch those making the slightest mistake… An 11km Super Special was to set the running order for the weekend’s main stages,… and the prologue turned into a G-Force party with Gadasin leading his new team mate Vladimir Vasiliev a close second despite the lingering dust that hung in the windless air. A sad sight though was seeing Schlesser struggling down in 36th place, just a few seconds ahead of a Fiat Panda! There was a lot of water in the fords which made the windows steam up so much that his co-driver had to reach across and wipe the screen with a rag… 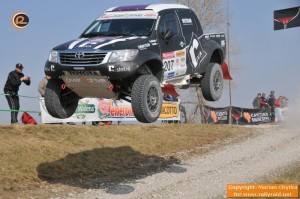 The real action started on a bright and clear Saturday spring morning with two runs of the 80km stage and it was flying Dutchman Peter Van Merksteijn who shot to the front with a stunning drive in his Overdrive Hi-Lux. If you saw any videos from the race on Youtube, it was him doing the very credible impression of Knight Rider over the jump. But while Overdrive were high in the air it was a very different story for G-Force and event favourite Gadasin retired with steering issues not that far from the start. “Odd years are the best for me,” smiled the 2007, 2009 and 2011 winner.

Gardermeister took a solid 3rd, almost a minute back from Vasiliev with Zapletal in the BMW close behind. 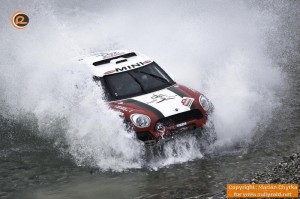 On the 2nd loop though it was the old master Schlesser at the top of the timesheets… in a 2-wheel drive car! Although when you consider that he is one of he world’s best drivers, has won some 200 world championship events and is driving a car that he designed, built and developed over 20 years it’s perhaps not really that much of a surprise…

The third day was a repeat of the previous day’s stages, but run in the other direction. Van Merksteijn had a minute advantage over G-Force’s Vasiliev… was the Russian going to drive carefully to protect his 2nd place which would be by far his best ever finish… Was he hell! He absolutely blitzed the stage and took 1’23 off Van Merksteijn to take the lead by 21 seconds! “We were going so fast down the riverbed that stones were flying up in front and coming back to smash the windscreen!” he said. 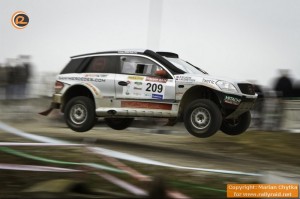 Behind the big battle for the lead Kuznetsov was getting used to the massive power and performance advantage increase from his T2 (production) Land Cruiser and the fact that he needed the handbrake to get around the tight turns. Zapletal was only driving at 80% because if he damaged his car he’d have no time to repair it before shipping it to Abu Dhabi straight after the event… and the friendly Romanian who wrote Zapletal’s BMW off for him in the Pharoans Rally last year was happy with 6th in his new car. “We never drove it before… On the 1st stage we had problems with the hydraulic steering and on the 3rd with the suspension, so we are happy with 6th place.”

Dubai’s Al Mutaiwei put smiles on people’s faces driving the stunning X-Raid MINI fresh from Dakar glory, but failed to shine on the timesheets and took 7th, over 10 minutes behind the winner.

And so then to the showdown… 81km to decide the winner. Van Merksteijn needed to be 22 seconds faster than the man who had just taken a minute more than that off him in the previous stage… He tried… but amazingly Vasiliev managed to go even faster than his last run and took a further 16 seconds to win by 37 seconds. I told you to watch this guy!!

The Ukrainian G-Force of Bogdan Novitsky took a fine third winning the team prize for the Russians with Schlesser recovering to a great 4th, 17 seconds ahead of Gardermeister.

The top teams contesting the full World Cup now have another race on their hands… one that is for their undervalued team managers and logistics directors… getting millions of dollars worth of race cars, service trucks, parts and tools from Italy to Abu Dhabi in time for the Abu Dhabi Desert Challenge… The sand and dunes will be  completely different event from the tight lanes and watersplashes of Italy and is the happy hunting ground of the ‘Desert Fox’ Schlesser and is also the back garden of Al Mutaiwei… Some say that the Desert Challenge is tougher than the Dakar and X-Raid know how to win here as well… 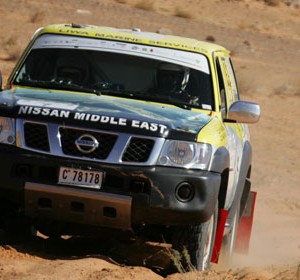