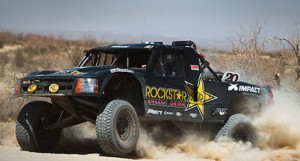 After starting first and slipping behind early in the elapsed-time race MacCachren worked his way back up to the front to re-take the lead at race-mile 172 in the No. 20 Rockstar Energy/MasterCraft Racing Ford F-150 SCORE Trophy Truck, ‘Rockstar Rob’ roared over and through the sandy, silty, rocky and dusty 248.64-mile course in four hours, 25 minutes, three seconds at an average speed of 56.29 miles per hour.

MacCachren is now tied with Las Vegas brothers Ed and Tim Herbst with the most race wins in the 18-plus year history of SCORE’s premier class. The victory was also MacCachren’s fourth in the last six SCORE races.

The Las Vegas native who has also been selected to the AARWBA All-America motorsports team six times and has eight SCORE season class point championships on his racing resume, MacCachren, 46, beat not only the cars and trucks, but also the motorcycles and ATVs that competed in the popular ‘spring break’ event.

Round 3 of the 2012 SCORE Desert Series was held this past weekend in Mexico’s picturesque fishing village of San Felipe, located 120 miles south of the U.S. border on the East side of the Baja California peninsula along the azure waters of the tranquil Sea of Cortez.

The start and finish line for the race was once again adjacent to the landmark San Felipe Arches on the outskirts of San Felipe.

After trailing Andy McMillin for much of the race until McMillin broke down at race mile 172 at the start of Azufre Wash, MacCachren sailed home for the victory with a four-minute margin over fellow Las Vegan B.J. Baldwin. Baldwin, who won this year’s first round of the series in Laughlin, drove the No. 97 Baldwin Motorsports Chevy Silverado to a time of 4:29:08 with an average speed of 55.43mph.

Finishing third overall in a new, lighter vehicle built in his facility in Santee, Calif. and in SCORE Trophy Truck was award-winning chassis builder Mike Julson, Descanso, Calif., in the No. 17 Jimco/Bad Apple Racing Ford F-150 with a time of 4:34:38 and an average speed of 54.32mph.

Moving up in class after winning the season point championship the last two years in Class 1/2-1600, young lion Luke McMillin, the 19-year old third-generation desert racer from El Cajon, Calif., made his debut in the unlimited Class 1 with a stunning class win and in impressive fourth place overall finish in a Chevy-powered Jimco open-wheel desert race car. McMillin covered the course in 4:35:56 to earn the victory.

Finishing fifth overall and fourth in SCORE Trophy Truck was the team of Tim Herbst, Las Vegas/Larry Roeseler, Boulevard, Calif., just 13 seconds behind McMillin at 4:06:09 in the No. 19 Terrible Herbst Motorsports Ford F-150.

The 207 starters from 25 US States and 11 countries competing in 28 Pro and 6 Sportsman classes for cars, trucks, motorcycles and ATVs. A total of 150 adventurers officially completed the challenging course within the 11-hour time limit for an amazing 72.46 finishing percentage. The total is the ninth most in the 26-year history of the event.

Earning his first SCORE overall motorcycle victory and third for KTM in this race was the team of Kurt Caselli, Murrieta, Calif./Ivan Ramirez, Ensenada, Mexico. They divided up the riding in Class 22 on the Bonanza Plumbing KTM 450SX-F to snap the six-race San Felipe winning streak by Honda with a winning of time of 4:40:03, averaging 53.28mph.

Reigning series and race Class 22 point champion Colton Udall and his co-rider Timmy Weigand, Valencia, Calif., were locked in a tight battle with Caselli/Ramirez and led by seconds on corrected time on their JCR/Honda CRF450X when Weigand crashed around race mile 160 and Udall took over and brought the bike to the finish 16:39 behind Caselli/Ramirez. Weigand was reported to receive minor injuries but was flown back to the US for further evaluation.

“We started first on the road, which means we were cleaning the trail,” reflected the winning MacCachren at the finish line. “At mile four, there was something buried in the ground. We were going 80 miles an hour or so and once I saw it there was no way to miss it. It popped the left front tire immediately. We had to pull over to the side of the road. (Co-rider) Cisco Bio changed the tire. We lost a few positions but once we got going again we started picking them off one at a time. I think we were second behind Andy McMillin.”

“We were just trying to pace with Andy because he started right behind us. When we first got going we were about four minutes behind him at mile 24. Then we started picking up. At about mile 100, I hit a bump and the truck just took off into the desert like I had no control. I thought something broke in the steering so Cisco jumped out and looked at everything. Meanwhile I was checking the steering and everything felt fine. He jumped back in and we took off real cautious. It seemed something had gone very bad and it went great. I was trying to keep pace with Andy and going into Azufre Wash about five to 10 miles in, he was pulled over. We still had to keep a pretty good pace, we knew there were people hovering around five minutes or so and we ran strong all the way to the finish. Everything on the truck was awesome.”

SCORE Trophy Trucks have won 16 overalls in San Felipe in the 18-plus-year history of the class.

In the first 26 years of this race, Honda stillhas earned 16 overall motorcycle victories (including the 14 of the last 16 years), Kawasaki has six, KTM now has three and Husqvarna has one.

This year’s 248.64-mile rugged race course utilized two washes that have never before been used for racing – Cuevitas and Amarillas.

The Cuevitas Wash replaced the Three Poles to Borrego section of previous courses.

The course ran in a counter-clockwise directionand for the first time, the second half of the race course included five infamous washes–Matomi, Azufre, Huatamote and Chanate along with Amarillas before heading to the finish line. The course included four physical checkpoints as well as 51 virtual checkpoints to help insure the safety and the integrity of the challenging race course.

Leading the parade of other class winners was Donald Moss, Sacramento, Calif., who won Class 3 in his sturdy Ford Bronco for the eighth time. Moss has also won all three races so far in the 2012 SCORE Desert Series.

Earning his sixth class win in San Felipe was Jeff Kaplan, Thousand Oaks, Calif., who led a team to victory in Class 40 for riders over 40 years old on a Honda CRF450X.

Also winning his third straight race this season in Class 5 as well as picking up his fourth straight class win in San Felipe was Kevin Carr, San Diego, in an unlimited VW Baja Bug.

Among the other motorcycle class winners was Francisco Septien, Ensenada, Mexico (Class 21, Honda CRF450X),
Traveling all the way from Bristol, Tenn. and Bristol, Va., Justin Matney’s RPM Off-Road, which opened the season with 11 total class wins in the two rounds in Laughlin in January, had a race-record eight entries in this year’s MasterCraft Safety Tecate SCORE San Felipe 250 and added two more class wins to their season total.

A bad weekend got worse for NASCAR Cup team owner/driver Robby Gordon, the 2009 SCORE Overall and SCORE Trophy-Truck season point champion who finished second in San Felipe in both 2009 and 2010 in the No. 77 Team Gordon Chevy CK1500. Gordon failed to qualify on Friday for Sunday’s NASCAR Cup race in Las Vegas and then was forced to the sidelines early in Saturday’s race with a broken transmission around race-mile 70.

In addition to season class point championships, the racers are also competing for part of the nearly $400,000 in cash purse and contingency postings each race. Drivers in the Pro car and truck classes are also attempting to earn prestigious SCORE Toyota Milestone Awards given to all car and truck class drivers who complete every required mile of the five-race season. Being presented by Toyota Motorsports for the 27th consecutive year, a total of 61 drivers are still in the hunt for the awards for the 2012 SCORE Desert Series after the first two rounds in the five-race series.

Racers are also competing for the annual SCORE Off-Roadsman of the Year awards, including the MasterCraft Safety SCORE Rookie of the Year award. All categories, except Engine Builder and Original Buggy Chassis Manufacturer, will be determined by public on-line voting while Engine and Buggy awards are determined by season points. 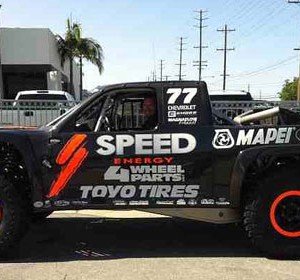 The day before the San Felipe 250, Robby Gordon heads back to the US after a week of prerunning in Mexico to practice and qualify...
Copyright 2011-2016 Rallyraid.net - RISE Network. All Right Reserved.
Back to top