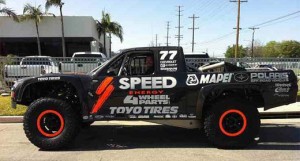 The day before the San Felipe 250, Robby Gordon heads back to the US after a week of prerunning in Mexico to practice and qualify his No.77 Dodge. As Robby and his Cup team focus on qualifying for the Kobalt Tools 400 on Sunday, the Speed Energy/Toyo Tires Off-Road team is in San Felipe completing their final checklist before the 250-mile race on Saturday.

Robby Gordon and his Off-Road team are proud to add “Mapei Products for Building” to their program for the 2012 San Felipe 250, as well as for the rest of the 2012 Off-Road season as Mapei will be featured on Robby Gordon’s Trophy Truck for the famous Baja 500 and Baja 1000 races.

“Mapei has been a great partner for our team for many years on the NASCAR side of things and I’m happy to announce that we continue to build that relationship and have them join us for some off-road racing” Robby Gordon said.

Last year, Gordon suffered some bad luck as he was running in the top 5 trucks just passed half-way when a broken shock shaft and drive shaft ruined his chances to finish on the podium for the 3rd consecutive time as he finished 2nd in 2009 and 2010. In 2010 the team overcame a broken shock within the 1st 30 miles of the race. They were able to change the shock in less than 10 minutes to get Gordon back on course.

After his 2012 Parker 425 overall victory in February in a RPM Off-Road Truggy, Gordon is back in his 900 hp No.77 Trophy Truck. This year the fans won’t see the signature bright orange truck as Gordon is “Back in Black” with a fully carbon fiber body that is ready to attack the rough sections of San Felipe, Mexico.

“I really didn’t think I wanted to ever come back to the San Felipe race until they made some changes because the course and terrain is just so rough it beats up our equipment and really wasn’t fun anymore. With their course changes and us getting a great starting position of 3rd I thought this would be a great opportunity for us to get a good starting position for the Baja 500.”

“In off-road racing it is very important for teams to start up front. I think we have a great advantage not being in everyone’s dust as we have a good shot of carrying our win from the Parker 425 into a win in San Felipe.”

The Speed Energy/Toyo Tires team will be up against some fierce competition as 250 vehicles have entered to see if they can master the rough terrain of the San Felipe course. Gordon has two class wins in this race and will start third on Saturday behind MacCachren and Andy McMillin. 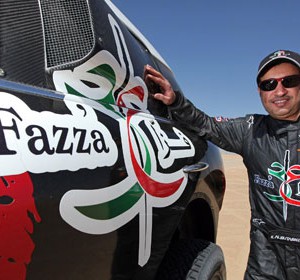 The 2004 FIA World Cup champion Khalifa Al-Mutaiwei carried out a two-day test session with his new Mini All4 Racing in the UAE desert...
Copyright 2011-2016 Rallyraid.net - RISE Network. All Right Reserved.
Back to top