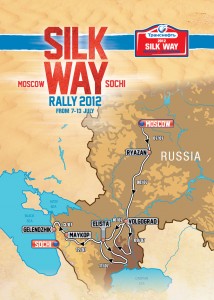 The fourth edition of the Silk Way Rally will take place on the route Moscow – Gelendzhik from 7th till 13th July, 2012.
In just three years after the first start, the race became recognizable worldwide sport brand, associated with a famous sports names, hot contest and exciting adventures. The rally is initiated by the Russian Government Ministry of Sports and Tourism. The title sponsor of the competition for the third time will be the company Transneft.
The Russian race quickly captured headlines and unique organizational standards provided by the professional team of sports managers, headed by Semen Yakubov, exalted it to the peak of the rally discipline. It became a center of the basic principles of the Dakar – overcoming of difficulties in extreme conditions, the opening of unexplored areas, familiarity with the people, culture, geography and history of the places where the marathon takes place.
One of the factors of success and popularity of the Silk Way Rally – is its philosophy. The race has been originally served to promote the Winter Olympic Games which will be in Russia in 2014.
This problem is successfully resolving – from year to year in a remarkable manner organisers manage to wove sport, travel and history of a great country into the ideology of the race. The route from the Varangians to the Greeks, Kulikovo Field, magnificent St.Petersburg, renovated Kazan, Caucasus, Red Square, battle of Stalingrad, Luzhniki and Olympic Games-80 – this is only a small part of that country’s and foreign competitors of the rally opened in a new way for themselves for 3 years in Russia. And together with them these openings were done by the television audience of 190 countries of the world on which the race was broadcast!
The July race is organised exactly six months before the start of the famous Dakar. The leading rally teams consider their participation in the Silk Way Rally as a guarantee of successful performance in rally-marathon Dakar and don’t miss an opportunity to test the forces and to use Russian event as an excellent platform for their sponsors. 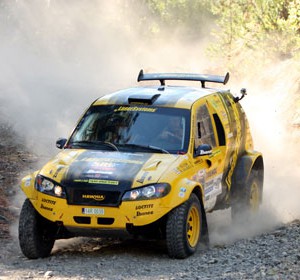 The workshop of Sólyom Team is infested by the HAWKIA. The parts of the racing car cover the floor, the shelves, the tables....
Copyright 2011-2016 Rallyraid.net - RISE Network. All Right Reserved.
Back to top