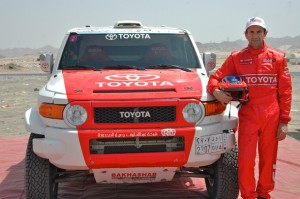 After his 15th position at the Dakar 2012 finish line in a Dessoude´s Buggy, Thierry Magnaldi should take part in the Silk Way Rally with the same vehicle. But while he waits for the Russian tracks, the driver heads for the Middle East and will join Saudi Arabia´s Ha’il Desert Challenge driving a FJ Cruiser Toyota prototype of Adbulah Bakhasab´s team.

Back after tests in Saudi Arabia, Thierry has a smile on his face: “Abdulah Bakhasab (official Toyota driver in WRC who manages the team Toyota Saudi Arabia) called me some time ago to take part of this Baja event. Of course I accepted because it is a marvelous occasion for me to race and acquire more experience, discover a new event and a new team.
Last week I went to test the car in Saudi Arabia and I was pleased by its performance and also the organization. Navigated by my co-driver Lucas Cruz, we run 200 km in two days in the Djedda region over a 6 km circuit were the terrain was varied, composed by dunes, and some dusty and stony tracks.

The FJ Cruiser is a prototype where the body keeps the original look, but with a V8 4.7l Toyota engine. It´s a very consistent car, with a reactive and strong behavior, easy to steer… I was truly conquered. I know I am used to 2wd, but now I feel seduced by the 4×4 too!” 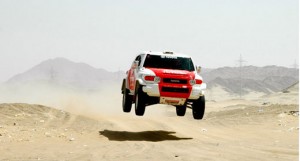 The appointment will be next week for a report after the Ha’il Desert Challenge. The Baja will take place from March 20 to the 23th in the Center North region of the kingdom.  Teams will attend to administrative and technical checks on March 20th at the Conference Center of Maghwatt to take part of the Super Prime of 6 km on Wednesday, followed by two race days in the An Nafud Desert.

The first Special, 260 km long, will take place completely in the dunes, and drivers must cross very high dunes for the first 160 km. Then, they will cross small farms and oasis, magnificent landscapes before they reach the mountains of Alolaym. The second day, they will complete 150 km. 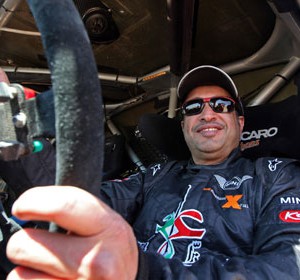 Dubai’s Khalifa Al-Mutaiwei returns to top level rallying action for the first time in eight years at this weekend’s...
Copyright 2011-2016 Rallyraid.net - RISE Network. All Right Reserved.
Back to top