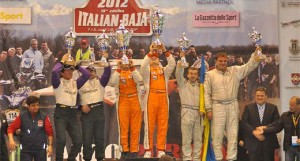 Vasilyev / Yevtyekov and their G-Force Proto are the big winners of the Italian Baja 2012. They won with 03:47:13 hours, only 37 seconds in front of Peter Merksteijn / Eddy Chevaillier with their Overdrive Toyota Hilux.

So a bad race for Boris Gadasin, but great rally for the Russian G-Force Protos… Van Merksteijn today lost time after he stuck in the water for some minutes, also the 6th gear doesn’ t work. “But the car is great, maybe we will start on the Dakar 2013 with the Toyota” the Dutchmen said.

Until the last stage it looks like, the finnish WRC-expert Tony Gardemeister would keep the 3rd place… but in the last stage his Mitsubishi Pajero Evo had some technical problems and he lost some minutes.

“Le Patron” Jean Louis Schlesser missed the podium and got 4th place… with only 24 seconds behind Bogdan Novitskiy. But: He won the buggy category and is now leading in the FIA Championship 2012. 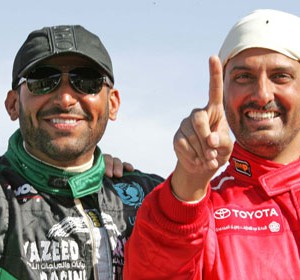