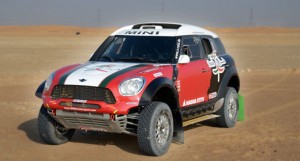 Just a few weeks after the one-two in the Dakar Rally, courtesy of the drivers Stéphane Peterhansel and Nani Roma at the wheel of their MINI ALL4 Racing vehicles, the X-raid team is about to battle it for the next success. Represented by the pairing Khalifa Al Mutaiwei (Dubai) / Andreas Schulz (Germany), X-raid is going to contest the FIA Cross Country Rally World Cup.

The World Cup season will be kicked off this weekend (15th to 18th March) by the Baja Italy, and comprises a total of eight events. In the past, the Trebur based team succeeded in winning the title an impressive five times. In addition to competing in the World Cup, the X-raid Team plans to also contest the Silk Way Rally and the Rally Morocco.

By jointly contesting the 2012 World Cup, Khalifa Al Mutaiwei and the X-raid team tie in with a successful cooperation: Eight years ago, Khalifa Al Mutawei raced a BMW X 5 – and won the 2004 FIA Cross Country Baja World Cup. The 40-year old from Dubai made his first steps on the motor-racing ladder back in 1993 and quickly secured his first wins. Following his success in 2004 he apparently left motor racing for good – but now he wants to go for it again, with the MINI ALL4 Racing.

For this project, he will be teamed up with experienced co-driver Andreas Schulz. The German is a two-time Dakar winner and together with Russia’s Leonid Novitskiy, he won the 2010 and 2011 FIA World Cup titles and finished fourth in the 2012 Dakar Rally.

In addition to contesting numerous rallies, the Monster Energy X-raid Team is going to also cover an extensive testing mileage. From this year, the FIA regulations stipulate the use of production engines and allow for just some minor changes and due to the new regulations, the car has to be subjected to numerous alterations.