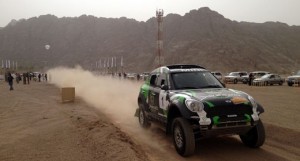 Saudi Arabia’s top rally driver Yazeed Al-Rajhi and his Portuguese co-driver Filipe Palmeiro extended their overall lead in the 2012 Saudi Arabia Ha’il Desert Challenge to 16min 20.1sec after a challenging 257.43km special stage through the remote landscapes of the An Nafud desert on Thursday.

“I am really happy with the way the stage went today,” said Al-Rajhi. “The strategy is working well and I managed to pull out a good lead. I am extra determined to win the event for the third time. After the rally in Sweden recently, I feel more confident in what I am doing and the Ha’il Rally seems easier than I remember last year. The new stages are not as difficult but I know there is one more long stage to go on Friday.”

The Mini All4 Racing driver was shadowed through the stage by Frenchman Thierry Magnaldi and his Spanish co-driver Lucas Cruz Senra in a Bakhashab-run Toyota FJ Cruiser Proto. They held a troublefree second overall on their first appearance in Saudi Arabia. 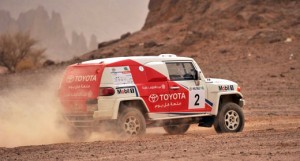 Saudi driver Abdullah Saeed Bin Hamden held third for long periods in a Nissan Patrol with navigator Ali Hassan, but they were overtaken near the end by Mtair and Abdullah Al-Shammeri, who now hold third place in a Toyota. The UAE’s Yayha Al-Helai and Khaled Al-Kendi started well in their Nissan Patrol and held fourth overall at the end of the stage, but Bin Hamden also slipped behind Safah Al-Saeedi and Ahmed Al-Shaqawi into seventh overall.

Dubai-based Briton David Mabbs was forced out when he blew two cylinders in his engine just four kilometres into the stage and there was misery for Ahmed Al-Qashimi, who was suffering from the effects of dehydration and withdrew from the event.

The rally is being organised by the Saudi Arabian Motor Federation (SAMF) under the presidency of His Royal Highness Prince Sultan Bin Bandar Al-Faisal and the patronage of His Royal Highness Prince Saud Bin Abdul Mohsen Bin Abdul Aziz, Governor of Ha’il, President of the Supreme Commission for Ha’il Development and the Head of the Supreme Commission of the Ha’il Rally.

Tariq Al-Rammah’s T2 Nissan was late out of parc ferme in Ha’il for the start of Thursday’s challenging 257.43km special stage through the An Nafud desert and he struggled from then on. Predictably, Al-Rajhi and Magnaldi headed off into the distance and the Saudi driver began to gain a slight advantage through the early kilometres.

As the stage progressed and Al-Rajhi continued to extend his advantage over Magnaldi, Al-Thani dropped behind the second pair of cars and began to fall into the clutches of Mtair Al-Shammeri, as Bin Hamden shadowed third-placed Al-Helai. The Saudi managed to pass the Emirati after around 80 minutes of the stage, but tail-ender Yasser Al-Saidan hit trouble and stopped.

Ahmed Al-Qashimi had been 12th after the super special stage in his Nissan, but he complained of dizziness and on-event medical staff took the Saudi away for treatment for suspected dehydration. Al-Thani stopped with mechanical problems and Saleh Al-Saleh struggled on at the rear of the field with reported engine-related issues in the second Bakhashab Toyota FJ Cruiser. Fellow Saudi drivers Salah Abdul Aal, Saleh Al-Saloom and Ahmed Al-Suwaidi were also in trouble, with Al-Suwaidi forced to retire.

Al-Rajhi finished the stage in just over three hours and 45 minutes, with Magnaldi following 15min 52.5sec behind in second place. Bin Hamden was delayed over the last section and Mtair Al-Shammeri was the third driver through the flying finish, near Jubbah, in his Toyota, the Saudi beating fourth-placed Al-Helai by 14min 25sec.

Tomorrow (Friday) teams tackle a shorter second desert stage through the An Nafud. A 25.59km liaison guides the remaining cars to the start of the 148.71km test at As Sufun. A final 51.71km road section then takes surviving crews back to Ha’il for the ceremonial finish at 17.45hrs. 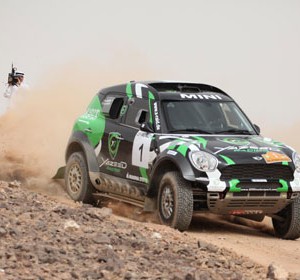