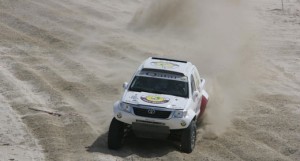 Al-Attiyah and co-driver Lucas Cruz Senra set the fastest time by 8.7 seconds in the car category with an Overdrive Racing Toyota Hilux and will lead the rest of the 25-car field into the Qatar desert on Wednesday morning.

“It was nice to win the stage and ensure that I have a clean track for the start of the first important stage tomorrow,” said Al-Attiyah. “But we all know that the real rally starts with that first desert stage on Wednesday.” 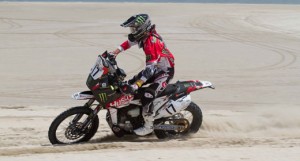 Spaniard Joan Barreda Bort recorded the quickest time in the motorcycle section on his Husqvarna TE 449 RR, with Portugal’s Helder Rodrigues and Spain’s Marc Coma rounding off the top three places. Qatar’s Adel Hussein Abdullah was the quickest of the 11 quads on the impressive international entry list, with the UAE duo of Obaid Al-Kitbe and Atif Al-Zarouni in second and third positions.

Blustery conditions and reduced visibility were a factor for the rally caravan on Tuesday morning, but the weather had improved somewhat when the first of the bike riders took to the special stage.

To prevent riders hanging back on the super special stage in a bid to improve their starting position for the first of the loop stages through the desert, FIM officials imposed a ruling that the fastest 10 riders could choose their starting order – a system similar to the one now used in the FIA World Rally Championship. Cars ran in reverse order with the fastest on the stage taking pole position for the first of the desert stages on Wednesday.

Portugal’s Helder Rodrigues, the reigning FIM world cross-country champion, led the 40 bike and quad riders and 25 cars into the short super special stage and posted the target time of 2m 46.4s, which was sufficient to confirm the second fastest time in his category. 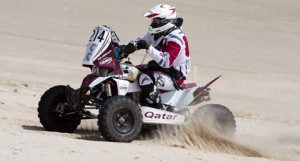 Tomorrow, competitors tackle the first 330.51km loop stage through the southern extremities of Qatar. The first bike is set to start the varied stage – 3.42km from the bivouac – at 06.00hrs, with the first car joining the competition at 07.15hrs. A repeat of the 3.42km liaison will guide competitors back to the Sealine campsite.

The stage crosses dry lakebeds, gravel tracks, sandy terrain and small dunes, before passing close to the sea on its return to the bivouac. A series of tricky dunes brings competitors to the stage finish. There will be three passage controls with a refuelling point for the bikes at PC2. 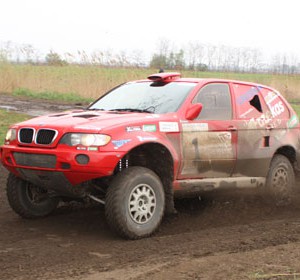 After three days of racing on the rain-soaked tracks of Eastern Hungary, Hungarian Károly Fazekas among the cars, his compatriot...
Copyright 2011-2016 Rallyraid.net - RISE Network. All Right Reserved.
Back to top