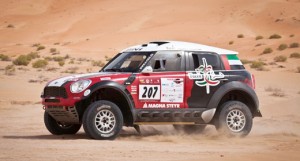 The first desert leg of the Abu Dhabi Desert Challenge also proved to be successful for Team – partially, that is. With their MINI ALL4 Racing, Khalifa Al Mutaiwei and Andreas Schulz repeated the result they secured in yesterday’s prologue by coming second once again. The special stage was won by Jean-Louis Schlesser in a buggy. The German pairing Stephan Schott and Holm Schmidt took their KS Tools BMW X3 CC to 10th position, with the Russians Ilya Kusnetsov and Roman Elagin finishing 12th, with their BMW X3 CC.

The first special stage took the competitors deep into the dunes and soft sand right away. Therefore, Al-Mutaiwei also got stuck several times and had to cope with finishing second, at the end of the 285-kilometre stage. Meanwhile, Schott and Kusnetsov encountered moments of shock, in the end of the stage. Up to this point in time, both had been among the front runners but then, their BMWs X3 CC rolled. Now, both cars are in the bivouac and the team is working hard to get them ready to race for tomorrow’s special stage. 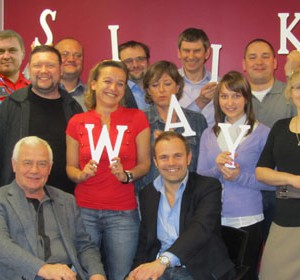 As a new proof of the importance of the western Europe for the organizers of the Silk Way Rally 2012, the Director of the event,...
Copyright 2011-2016 Rallyraid.net - RISE Network. All Right Reserved.
Back to top