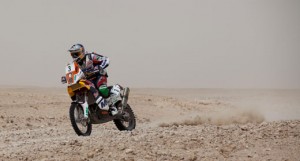 Marc Coma on Friday consolidated his overall lead in the penultimate stage of the inaugural Sealine Rally in Qatar securing a comfortable third place in the longest stage to move ahead in the overall rankings to have a lead of 5 minutes 59 seconds.

Coma finished third on Friday in what was the longest stage of this relatively short rally. He finished just under two minutes behind the leader Paolo Goncalves of Portugal. KTM rider Jordi villadoms of Spain was second fastest in Friday’s stage. Coma’s biggest rival for the top podium spot, Helder Rodrigues of Portugal finished back at eighth in the stage but still sits in second behind KTM’s factory rider in the overalls.   Friday’s stage was 358 km of tough desert riding with a small 7 km liaison. It was the longest stage in this year’s competition.

Marc Coma: “Today was a very difficult and long day. We were four and a half hours on the special stage and it was very stony and a lot of off-piste riding. I was leading at the 40 km mark so it was up to me to open the track and that is also difficult because you must really concentrate the whole time. But we did it with no problems and no mistakes and we have six minutes advantage going into the last stage tomorrow.”

While almost six minutes is a good cushion of advantage for Coma, there is still plenty of racing to go as riders have a final stage of some 208.63 km tomorrow in the deserts of the Gulf State. KTM’s three-times Dakar winner has underlined that the Sealine Rally is new territory for all competitors and in such a compact competition there is very little room for error. He must tackle the remaining navigation and speed with caution because it will be near impossible to recover lost time should he make a mistake.

Should Coma be able to secure the victory it will be his second towards the FIM Cross Country Rally World Championship title after having won at the Abu Dhabi Desert Challenge two weeks ago. This year’s championship comprises just four rounds and the Sealine is followed by the Sardinia Rally from June 23-28 and the Pharaons Rally in Egypt September 30-October 6, 2012.