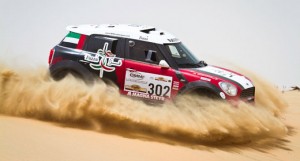 With their MINI ALL4 Racing, Khalifa Al Mutaiwei and his German navigator Andreas Schulz secured third position in Qatar’s Sealine Cross Country Rally – behind Nasser Al Attiyah and Lucio Alvarez. The Russians Ilya Kuznetsov and Roman Elagin completed the good team result by taking their BMW X3 CC to seventh position, in the four-leg event. Saudi Arabia’s Yazeed Al Rajhi and his Portuguese co-driver were back in action despite having rolled yesterday but had to cope with more bad luck, resulting in another early retirement.

In the fourth and final leg, Al Mutaiwei and Schulz finished sixth. In the early stages of the special stage, the pairing temporarily lost its way but succeeded in partly making up the lost ground afterwards. In the end, coming sixth proved to be enough for keeping Jean-Louis Schlesser in his buggy at bay. An important step in the battle for the FIA Cross County Rally World Cup title as it helped Al Mutaiwei – currently in second position – reducing the lead of World Cup leader Schlesser.

Kuznetsov once again completed the leg without having to cope with any major problems and crossed the finish line of the 208.63-kilometre special stage in seventh position. He also secured seventh place in the overall rankings. Al Rajhi had bad luck again, the team had succeeded in rebuilding the MINI ALL4 Racing, following yesterday’s incident and so, the Saudi Arabian could rejoin the race action. But following a massive puncture including a broken wheel, the brake caught fire – and Al Rajhi and Palmeiro decided to retire early.

“Altogether I’m happy with what we have achieved in this rally,” said X-raid Team Manager Sven Quandt. ”It was of particular importance that Khalifa succeeded in closing the gap to FIA World Cup leader Schlesser. It was no surprise that Nasser prevailed in this event. After all, he knows his home county really well and in addition, the petrol cars have been really fast, here.” 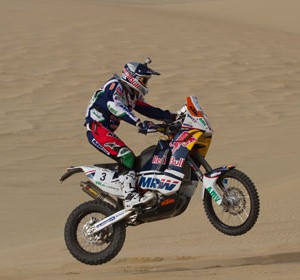 KTM’s 3-times Dakar winner Marc Coma on Saturday underlined he is King of the Desert by taking overall victory in the first...
Copyright 2011-2016 Rallyraid.net - RISE Network. All Right Reserved.
Back to top