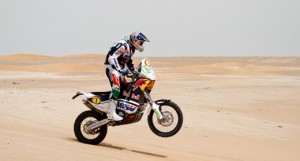 Coma of Spain finished the day with a slim one minute 09 advantage over Helder Rodrigues of Portugal, who Marc had already identified as his greatest rival in the opening round of the world Rally raid Championship. Other top ten KTM riders included Jordi Villadoms of Spain, in fifth, Coma’s factory teammate Ruben Faria of Portugal in seventh, Jakub Pryzygonski of Poland in eighth and Italian Paolo Ceci in tenth.

Monday morning presented the riders with an overcast sky making visibility in the stark landscape difficult. The opening stage featured 285 km of desert including many small, wind swept dunes, which proved to be the downfall of a number of riders including KTM rider and Dakar veteran Jacek Czachor of Poland. He was up front for the first 180 km but then crashed in the dunes and injured his leg. He will review the situation tomorrow morning and decide if he is able to continue, his team reported.

If day one was tough, riders can expect even more challenges in Stage two tomorrow and organizers have promised that they will be pushed to their limits. They face an energy sapping 434 km over the towering sand dunes in the second leg named after the ADNOC (Abu Dhabi National Oil Company). “This is where the action really hots up, as the competitors learn all about the technical demands of racing among some of the world’s biggest sand dunes,” said Mohammed Ben Sulayem, Desert Challenge founder and president of rally organizers, the Automobile and Touring Club of the UAE (ATCUAE).

Riders will need to be on their bikes at 8.00 a.m. when they well head west for 100 km before heading back towards the daunting dunes south of Liwa. They finish back at the event’s bivouac desert base, located next to the lQasr Al Sarab Desert Resort by Anantara.

Coma said before the start of the rally that it would be very demanding, especially in temperatures exceeding 40 degrees Celsius especially in the Al Gharbia region and the Liwa desert. Stage four of 500 km, including 318 km against the clock is expected to be the toughest and mistakes will rarely be forgiven. 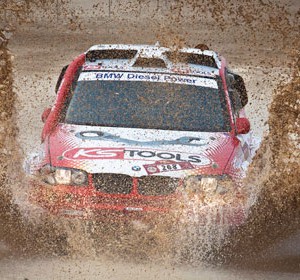 The X-raid team made a promising start into the Abu Dhabi Desert Challenge. In the two-kilometre prologue, Dubai’s Khalifa...
Copyright 2011-2016 Rallyraid.net - RISE Network. All Right Reserved.
Back to top