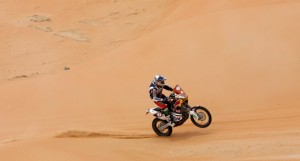 On a day that saw temperatures in the desert hitting around 40oc, Jean-Louis Schlesser (cars) and Marc Coma (bikes) finished on top of the overall rankings after the unique, double-stage Qasr Al Sarab Leg of the Abu Dhabi Desert Challenge.

Spaniards once again hold all three of the top positions in the overall bike rankings after the third leg. Reigning Desert Challenge champion, Coma enjoyed a blistering day in the sun to overhaul fellow countryman Joan Barreda-Bort and establish an overall lead of 8m 27s. Jordi Villadoms currently holds the final podium place.

The 2012 battle for the title of best quad biker continues to hot up with Obaid Al Kitbe and Sebatian Husseini, both from the UAE, continuing to slog it out for top spot. Husseini took the honours on Leg 3 ahead of the Emirati, but Al Kitbe continues to hold onto top spot, albeit with a reduced lead of just over 12 minutes. Lukasz Laskawiec from Poland is over 1h 30m behind in third place, but only just ahead of women’s world champion, Camelia Liparoti.

The Desert Challenge is renowned across the world as one of the world’s most difficult, technically demanding endurance rally. For this reason alone, it attracts racers from across the globe determined to conquer the towering sand dunes and rough terrain of the Western Region. And in 2012, more female competitors than ever before have entered, with the aim of proving themselves in this toughest of sporting events.

Six women started this year’s event, with competitors from Bulgaria, Germany and two from Italy joined by UAE residents Tonya Colson in the bikes and Sheila Hutton-Barker in the cars.

Colson is this year making her Desert Challenge debut after years of being involved with rallying behind the lens of a camera. Battling injuries sustained on Leg 1 and 3, she commented: “It’s a lot tougher than I thought it would be. The mental aspect is the most difficult, and is what I’ve struggled with most, but I’m going to get back on my bike and continue to try to learn a little each day.”

On the other hand, 44-year old German racer, Andrea Mayer is no stranger to the world’s ultimate desert rally, having previously competed in the car and bike categories. “The quad is the easiest vehicle I’ve driven here, but it’s physically more demanding than driving a car,” she said. “The Abu Dhabi Desert Challenge is my favourite rally. The dunes here are the most difficult in the world, yet they are also so beautiful.”

Zornitsa Todorova from Bulgaria was making her ADDC debut: “I have never tried desert racing before. You can tell this rally is hard, with so many racers dropping out,” she explained. “I had an accident in first leg and injured my elbow. I tried the second leg, but pushed too hard and couldn’t continue. I have to say, the medical team here is the best I have ever seen, and the organisation is fantastic.” 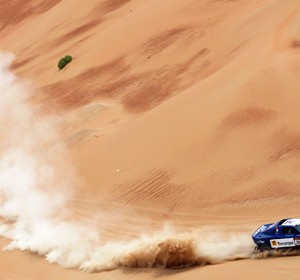 On a day that saw temperatures in the desert hitting around 40oc, Jean-Louis Schlesser (cars) and Marc Coma (bikes) finished...
Copyright 2011-2016 Rallyraid.net - RISE Network. All Right Reserved.
Back to top