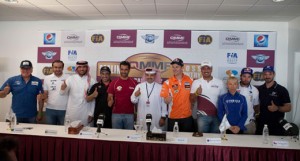 Twenty-five cars, 29 motorcycles and 11 quads lined up at the start of the largest event of its kind ever to run through the State of Qatar. The rally will run through the Qatar deserts over the next five days with the finish scheduled for 16.00hrs on Saturday afternoon. Nasser Khalifa Al-Attiyah, president of the Qatar Motor & Motorcycle Federation (QMMF), flagged teams and riders away from the start.

“This is a ground-breaking event for this country and we are extremely proud to see so many famous names from the world of cross-country rallying here with us,” enthused Al-Attiyah. “A great deal of effort has gone into organising this event and I pay a special thanks to Pedro Almeida and Jaime Santos, our bike clerk of the course Iain Black and all members of our organising committee for their efforts.”

Amongst those tackling an event in Qatar for the first time are the Brazilian duo of Reinaldo Varela and Gustavo Gulelmin from the Divino Fogão Rally Team. Varela is a restaurant chain owner by trade and currently holds eighth place in the FIA World Cup points’ standings. He has over 300 rally starts on his curriculum vitae, including class wins in Brazil’s Rally dos Sertoes.

Gugelmin began racing alongside his father, the cousin of former F1 and Indy racing driver Mauricio Gugelmin, and has teamed up with Varela at the wheel of a Ralliart Italy Mitsubishi Pajero this season. The duo have rented a Nissan to tackle the Qatar event after using a similar vehicle to take seventh overall and second in the T2 class in the recent Abu Dhabi Desert Challenge.

Mubarak Al-Hajri will tackle the Sealine event in a powerful V8-engined Chevrolet LS3 Pick-Up, built for American Baja racing, acquired by the Qatari and now being run in the Sealine race by an American team headed by Damen Jefferies, a multiple SCORE class champion.

“I tested the car a couple of days ago and it has so much power,” grinned Al-Hajri, who will be co-driven by the UAE’s Arif Yousef Mohammed. “The problem is the engine is in the back, we keep getting wheel spin and keep frying the tyres!”

Four of the riders have entered on KTMs, but Botturi will develop an Italian TM Rally 450 as the team looks to run its own bikes in the future. The Qatar challenge will run under the on-event management of Dakar legend Jordi Arcarons.

“This is a new country for me to race in and I approach the event with excitement and a little nervousness of how to place the strategy,” said FIM Cross-Country World Championship leader Marc Coma.

“In all my years of racing around the world, I have always had a win-win strategy and I don’t see any reason to change now at my age,” joked Schlesser, the leader of the FIA World Cup for Cross-Country Rallies.

Nasser Saleh Al-Attiyah was also in buoyant mood. “I will push hard on the first day and make myself a 10-minute lead,” joked the tongue-in-cheek Qatari, much to the amusement of his rivals and the assembled media.

Tomorrow (Tuesday) the entire event transfers to the Sealine Beach Resort and a purpose-designed bivouac with catering, servicing and media facilities. Motorcycles and quads will tackle a 4.2km super special stage from 12.55hrs and the first of the cars will take to the stage at 13.40hrs. 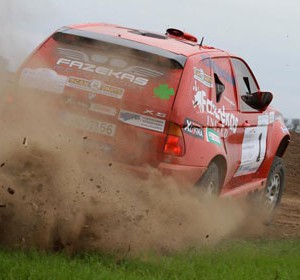 Károly Fazekas among cars, Richárd Hodola at the bikes and Lukasz Laskawiec among quads topped the field after the six specials...
Copyright 2011-2016 Rallyraid.net - RISE Network. All Right Reserved.
Back to top