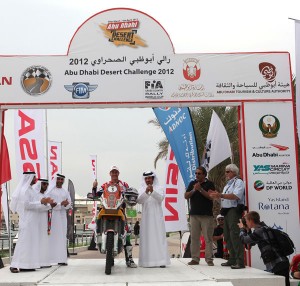 Coma rubber-stamped his superiority in the best possible way by claiming victory in the final, Abu Dhabi Aviation leg of the rally, which also serves as the opening round of the FIM Cross-Country Rallies World Championship. The win makes the Spaniard the most successful motorcycle rider in Desert Challenge history, ahead of fellow KTM racer Cyril Despres, with whom he previously shared the record.

“It’s always special to win here, and it’s a great way to start the season, especially as the rally has a lot of really high level riders competing this year, which is good for everyone,” said a delighted Coma. “The terrain here is always different, and the dunes change, but this year the conditions have been better. Today was just about being controlled, which was tricky, but I did enough to win.” 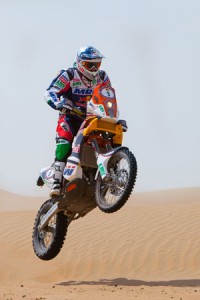 While Barreda-Bort failed to win any of the individual legs, the Husqvarna Rally Team by Speedbrain rider demonstrated the importance of a consistent, paced approach to such a demanding endurance race, finishing 10minutes 51seconds ahead of teammate Paulo Goncalves from Portugal. By coming second and third, the racers also registered the team’s first ever world championship podiums.

Sean Gaugain from Team Gecko was the highest place of the UAE entrants, finishing in an impressive seventh place, just 50 minutes behind Coma. Emirati Mohammed Balooshi overcame an injury sustained earlier this year in the Dakar Rally to finish in 12th position. “I am just glad to have completed the race this year, the fourth time I have entered. This is an achievement in itself, so I am pretty happy, but next year I aim to get my fitness sorted and to do even better.”

The over 450 class was won by Marek Dabrowski of Poland. Riding a KTM 505, he finished in 17th place overall, almost two hours ahead of his nearest challenge, Tory O’Connor from Australia.

“Marc Coma has shown once again why he is one of the best cross-country racers in the world. To complete this rally is an achievement in itself, so to win it six times speaks volumes for his talent,” said Mohammed Ben Sulayem, founder of the Desert Challenge and president of rally organisers the Automobile and Touring Club of the UAE. “This year we have hosted the best field of cross-country motorcycle racers ever to have been assembled in the Middle East, which reinforces the importance of the Desert Challenge on the global racing calendar.”

The Abu Dhabi Desert Challenge is held under the under the patronage of HH Sheikh Hamdan Bin Zayed Al Nahyan, the Ruler’s Representative in the Western Region. Its high-profile line-up of supporters, includes the Abu Dhabi Tourism & Culture Authority, Nissan, ADNOC and Abu Dhabi Aviation. 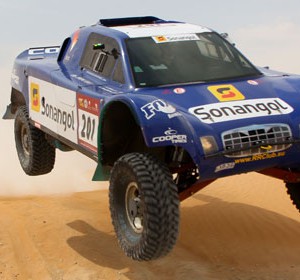 There was to be no fairytale homecoming for the UAE’s Khalifa Al-Mutaiwei as veteran rally driver Jean-Louis Schlesser...
Copyright 2011-2016 Rallyraid.net - RISE Network. All Right Reserved.
Back to top