After four days of intense competition, both against the desert and each other, the remaining competitors in this year’s Abu Dhabi Desert Challenge are tantalisingly close to the finish line. Jean-Louis Schlesser, Marc Coma and Obaid Al Kitbe from the UAE will all be dreaming of victory as they sit in top place in the car, bike and quad categories respectively with just 287 kilometres to go.

The toughest stage of the rally, today’s 317 kilometre leg pushed the rally’s remaining competitors and their vehicles to the max ahead of Friday’s departure from the beautiful Western Region of Al Gharbia and on to the finish line at Al Dafrah. This penultimate leg is appropriately named after Nissan, a long-term supporter of the rally, whose flagship Patrol SUV is the race’s official car. 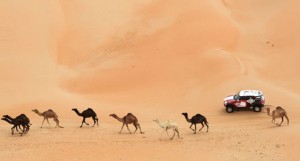 Driving the Team X-Raid MINI All4 Racing, Khalifa Al-Mutaiwei has enjoyed an impressive return to racing in the UAE, but got stuck in sand towards the end of today’s stage, seriously damaging his chances of a remarkable comeback win. The result nevertheless extended his lead over third place Patrick Sireyjol from France.

This left veteran racer Jean-Louis Schlesser looking odds-on to record a remarkable sixth Desert Challenge win, his first since 2003. The Frenchman enjoyed a good day behind the wheel of his Sonangol Buggy, finishing over 21 minutes ahead of Al-Mutaiwei to open up a 38m 03s lead over the Emirati.

Reinforcing the extreme nature of the competition, and the incredible demands it places on competitors and their vehicles alike, only around 60% of the cars that started remain in the rally. Of these, six are piloted by Emiratis, and a seventh by Ibrahim Al Muhanna from Saudi Arabia.

The Abu Dhabi Desert Challenge carries a particular emotional appeal for the many Emiratis who enter each year. The chance to compete in their homeland, against the world’s top riders and drivers is an unmissable opportunity for any serious racer. And the sand dunes that cover the majority of the 1,520 kilometres of competitive stages act as a great leveller, offering the local stars the chance of toppling the big names. 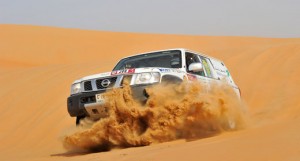 One such racer is Yahya Bel Helei, who has competed in every single Desert Challenge since it was founded 22 years ago. Having finished fourth last year, Bel Helei is currently in fifth place and still holds out hopes of claiming a top three position with co-driver Khalid Al Kendi in their Nissan Patrol.

“I think I have done very well up until now, especially considering I am competing against world class drivers, who are racing in cars built specifically for this desert terrain,” he said. “The Liwa desert is a very difficult place to race, and only competitors who have taken part in the Desert Challenge can fully understand this. As we head into the final day, I am very pleased to be leading the T2 category and in fourth place overall.”

Nabil Al Shamsi and co-driver Salem Rashed have also enjoyed some success this year, although day four was marred by a broken driveshaft, leaving them out of the running for a podium position. “I will be working hard to fix the problem with my team and am looking forward to starting again tomorrow. The great thing about the Desert Challenge is that every day is a new race,” said Al Shamsi.

“This is the biggest rally in the Middle East,” he added. “I’m really happy to welcome so many top international competitors to the UAE and it’s a great feeling when you pass champions from other countries, but my competition is really against the desert itself, not other drivers.”

Renowned as being one of the world’s most difficult, technically demanding endurance rallies, the Abu Dhabi Desert Challenge attracts the best racers from across the globe, determined to conquer the towering sand dunes and extreme heat of the Western Region. 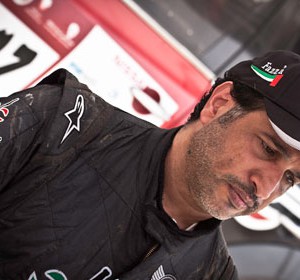 In the fourth special stage of the Abu Dhabi Desert Challenge, Khalifa Al-Mutaiwei (VAE) and Andreas Schulz (GER) once again...
Copyright 2011-2016 Rallyraid.net - RISE Network. All Right Reserved.
Back to top