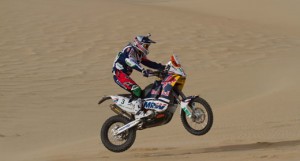 Joan Barreda Bort carved his way through the motorcycle field, passing numerous slower bikes and held the lead over Coma until the later part of the special. The championship leader seized his opportunity to snatch the stage win late on, however, and moved into a slender 6.8-second lead over his Spanish rival at the overnight halt.

Portugal’s Helder Rodrigues finished third. Fellow countryman Paolo Goncalves damaged the mousse in his front tyre and was forced to try and reach the stage finish on a wheel rim. He eventually recorded the unofficial 24th fastest time, 78 minutes behind the stage winner.

The faster sections of the stage were not ideally suited to the quads, but Poland’s Lukasz Laskawiec led the category on his Yamaha until mechanical problems cost him dearly. The UAE’s Atif Al-Zarouni duly reached the finish as the first classified quad rider on his Honda 450, with Poland’s Rafal Sonik in second place.

After the top 10 riders had chosen their starting positions for the day’s stage it was left to Australia’s Matthew Fish (KTM) to lead the 29 bikes, 11 quads and 24 cars into the special in ideal weather conditions – minimal wind and clear visibility. Stage winner Barreda Bort opted to start at the rear of the bike and quad field in 40th position, with Rodrigues and Coma slotting into 39th and 38th.

‘Chaleco’ Lopez began the stage from second on the road and passed Fish after 25 minutes to take the virtual stage lead. Qatar’s Nasser Al-Mansoori suffered technical problems and was unable to take the start on time and began at the rear of the field.

Lopez was the first to reach PC1, but Barreda Bort recorded the quickest time to increase his virtual lead. Al-Attiyah cruised into a comfortable lead in the car category and passed the first control point in 41m 56s, 2m 32s ahead of Russia’s Vladimir Vasilyev. Emirati Nooh Buhumaid stopped shortly after the start with mechanical problems and Saudi’s Yasir Saeidan and Saleh Abdul Ali were also in trouble.

Barreda Bort passed Coma and maintained a 1m 14s lead to the refuelling point, as Al-Attiyah reached the same point nearly nine minutes faster than the leading bike and 8m 42s clear of rival Schlesser. The Qatari began to reel in many of the front-running bikes as well and reached PC3 behind bike front-runner David Casteu, having overtaken everyone else on the stage. Barreda Bort maintained a virtual 55-second lead over Coma in the motorcycles.

The flying Qatari overtook Casteu soon afterwards and opened the road for the first time heading towards PC4 – a control that he passed in under 2h 40m. Weather conditions began to deteriorate in the camp as the leaders closed in on the stage end.

Barreda Bort maintained a 57-second advantage over Coma heading towards the sand dunes near the finish, but Coma sneaked through in the sand, as he and Al-Attiyah confirmed their respective stage wins in very different circumstances.

Tomorrow (Thursday), competitors tackle a repeat of the 330.51km loop stage through the southern extremities of Qatar, with the first bike beginning the test at the same time – 06.00hrs. The stage features four passage controls and a refuelling point for the motorcycles at PC2. 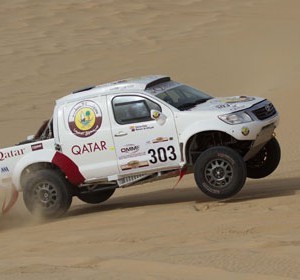