After four days of intense competition, both against the desert and each other, the remaining competitors in this year’s Abu Dhabi Desert Challenge are tantalisingly close to the finish line. Jean-Louis Schlesser, Marc Coma and Obaid Al Kitbe from the UAE will all be dreaming of victory as they sit in top place in the car, bike and quad categories respectively with just 287 kilometres to go. 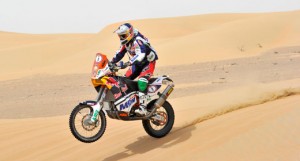 The toughest stage of the rally, today’s 317 kilometre leg pushed the rally’s remaining competitors and their vehicles to the max ahead of Friday’s departure from the beautiful Western Region of Al Gharbia and on to the finish line at Al Dafrah. This penultimate leg is appropriately named after Nissan, a long-term supporter of the rally, whose flagship Patrol SUV is the race’s official car.

Current FIM World Champion, Helder Rodrigues claimed his first stage win of the rally, ahead of current Desert Challenge champion, Marc Coma, who finished 15m 26s behind in eleventh. But it wasn’t enough to change the overall lead, which Coma retained, albeit by a reduced margin.

Ahead of tomorrow’s final stage, the Spaniard is 6m 34s ahead of fellow countryman Joan Barreda-Bort, and 8m 25s ahead of Portuguese rider, Paulo Goncalves in third. Sean Gaugain of the Gecko Team is the highest placed UAE rider, in seventh place overall, while Emirati Mohammed Balooshi is 13th.

Today was a long day, with a long track. We opened the track for the others, so we lost some time, but it’s still ok,” said Coma. “Tomorrow is another long stage where you could lose a lot of time, but equally where you could gain it, so overall we’re in pretty good shape.”

A bad day for UAE resident Sebastian Husseini, who broke his quad’s suspension, meant it was a particularly good one for Emirati Obaid Al Kitbe in the quad bike category. Al Kitbe’s stage win, combined with Husseini’s misfortune, means that the Umm Al Quwain resident now holds a lead of more than 1h 50m over his new closest challenger Lukasz Laskawiec from Poland

Ahead of what he hopes will be a triumphant return to Yas Marina tomorrow, Obaid commented: “I kept my energy for tomorrow. One of my tyres was flat but I made it back. I’m hoping for a good race tomorrow, hoping to keep my lead, and hoping to finish the race in front, which is the dream of all racers.”

With Husseini dropping down to eighth, behind Atif Al Zaroni, Camelia Liparoti jumped into third position, and will be looking to follow up on her impressive second place last year with a second successive podium position. Currently sitting in fifth position, another female entrant, Andrea Mayer from Germany, will also be holding hopes for a top three finish.

Renowned as being one of the world’s most difficult, technically demanding endurance rallies, the Abu Dhabi Desert Challenge attracts the best racers from across the globe, determined to conquer the towering sand dunes and extreme heat of the Western Region. 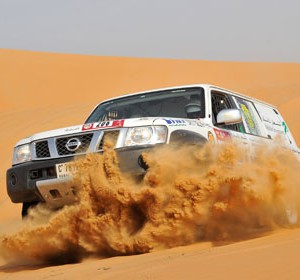 After four days of intense competition, both against the desert and each other, the remaining competitors in this year’s...
Copyright 2011-2016 Rallyraid.net - RISE Network. All Right Reserved.
Back to top