Dubai’s Khalifa Al-Mutaiwei will be aiming to continue his successful return to cross-country rallying at next week’s Sealine Cross-Country Rally, Qatar’s new third round of the 2012 FIA World Cup for Cross-Country Rallies. 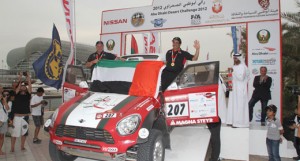 Since announcing his return to top flight competition after a seven-year absence at a press conference in Beirut in February, Al-Mutaiwei and German co-driver Andreas Schulz have taken seventh overall in the Italian Baja and a superb second position in the recent Abu Dhabi Desert Challenge at the wheel of their Fazza Rally Team Mini All4 Racing.

Those two excellent performances, which would have been even better had it not been for a couple of technical problems and a delay in the sand dunes in the UAE, have catapulted the Dubai driver into second position in the points’ standings for the FIA World Cup Drivers’ Championship that the Emirati won back in 2004. He currently lies 24 points behind series leader Jean-Louis Schlesser of France.

“This is going to be my third event in the World Cup and it is also very important because maximum points are at stake,” said Al-Mutaiwei, who is part of a three-car X-raid team taking part in the Sealine Cross-Country Rally.

“The event is like a piece of clean paper for most of us. But, I know from previous visits to Qatar that the terrain is very difficult and demanding and the event will not be easy.

“Punctures could be a problem and I must be fast and cautious not to make a mistake. I am still learning about the car and the team, but I will do my best and I hope that luck will be on my side this time.”

Co-drivers from Lebanon, Belgium, Germany, Jordan and Egypt have boosted the international flavour of the first event of its kind to be run by the Qatar Motor and Motorcycle Federation (QMMF).

International teams will go through scrutineering checks in Doha on Monday (April 16th), prior to the ceremonial start in the afternoon. There will be a timed super special stage on Tuesday (April 17th) and the first of four desert legs of the new Sealine Cross-Country Rally begins on Wednesday (April 18th) Action draws to a close on Saturday, April 21st. 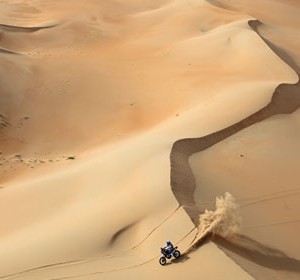