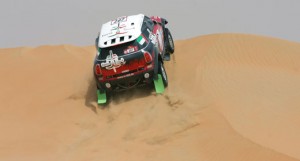 Having finished second in the Super Special and the first leg of the Abu Dhabi Desert Challenge, X-raid celebrated its first leg win in the event, courtesy of Khalifa Al-Mutaiwei (UAE), Andreas Schulz (GER) and their MINI ALL4 Racing. On the third day of the event, they crossed the leg’s finish line with a lead of more than seven minutes over Jean-Louis Schlesser. Russian pairing Elya Kusnetsov and Roman Elagin took their BMW X3 CC to seventh position, with the two Germans Stephan Schott and Holm Schmidt in the KS Tools BMW X3CC completing the solid team result by coming ninth.

Al-Mutaiwei took the lead right at the beginning of the 283-kilometre leg and defended it throughout the day. With this leg win, he succeeded in reducing Schlesser’s lead in the overall standings to some 24 minutes. For 230 kilometres of the total distance, the drivers had to battle their way through a spectacular red dune field in the Liwa Desert – including the Tal Moreeb, the biggest dune of the UAE.

In tomorrow’s special stage, the competitors will have to complete another loop around the Qasr Al-Sarab bivouac. The 345-kolometre leg will be interrupted by a short neutralisation section. The Abu Dhabi Desert Challenge will end after a total of five legs in Abu Dhabi. 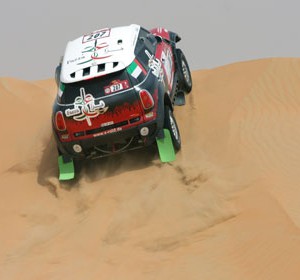 Emirati Khalifa Al-Mutaiwei and Joan Barreda-Bort from Spain hold the overall lead in the car and bike categories respectively,...
Copyright 2011-2016 Rallyraid.net - RISE Network. All Right Reserved.
Back to top