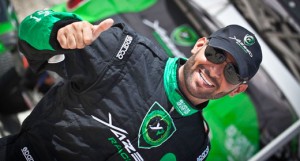 Saudi Arabia’s Yazeed Al-Rajhi, Spain’s Joan Barreda Bort and Poland’s Lukasz Laskawiec were the star performers after a repeat run through the 330.51km special stage of the Sealine Cross-Country Rally in the southern Qatar desert on Thursday.

Al-Rajhi and Portuguese co-driver Filipe Palmeiro claimed an excellent stage victory in their Mini All4 Racing to reduce local hero Nasser Saleh Al-Attiyah’s overall lead to 8m 55s heading into the last two days of the third round of the FIA World Cup. Barreda Bort overtook numerous rivals in the motorcycle category to clinch the fastest time on two wheels.

“I felt good about the stage today,” said Al-Rajhi. “Yesterday I did not know anything about the tracks and I lost nearly seven minutes with two punctures. Today I planned to attack and it worked perfectly. This is a fantastic stage win for me, especially here in Qatar. I even had a puncture near the finish at kilometre 268 and I was delayed a little by passing some of the other cars.” 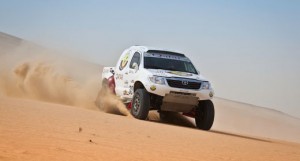 Al-Attiyah finished the stage in second position with his Overdrive Toyota Hilux and Dubai’s Khalifa Al-Mutaiwei set the third quickest time and this was enough to push the Fazza Rally Team driver up from sixth to third and, more importantly, in front of championship rival Jean-Louis Schlesser.

“Today the stage was much rougher than yesterday and more difficult,” said Al-Attiyah. “I had a puncture but I am still quite happy because I have a comfortable lead and we have the most difficult stage of the event tomorrow.”

Time penalties were also imposed on several leading drivers who had not adhered to the new maximum stage speed limits. Amongst those to receive a one-minute penalty were car leader Al-Attiyah, his cousin Faisal Al-Attiyah and Vladimir Vasilyev. This meant that the Qatari’s overall lead over Al-Rajhi was reduced to 10m 07s.

Al-Rajhi had suffered two punctures on the first stage and opted to take three spare wheels on this occasion. He had been running on a similar pace to Al-Attiyah at the first PC on day one and reached the check point 73 seconds in front of his rival on Thursday morning. He extended that virtual stage lead to 3m 09s at PC2, as Schlesser fell behind Al-Mutaiwei in the overall rankings after delays and was overtaken by a flying Al-Rajhi.

Tomorrow (Friday), competitors tackle the longest stage of the entire event – a 357.99km loop through the southern Qatar desert. The first bike will start at a similar time of 06.00hrs, with the leading car joining the competition at 7.15hrs.

The stage starts in the same place, before heading west across the other side of the Salwa Road and then turning south towards Abu Samra and then east towards the Inland Sea. It offers faster and harder tracks, less sand dunes that the first two days and finishes in the same position. 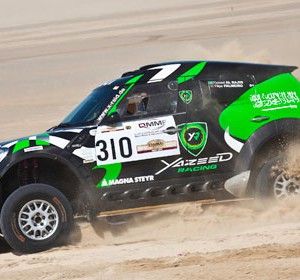