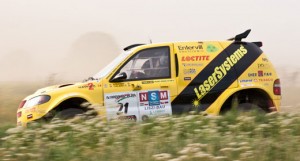 Sólyom Team’s racing car ’HAWKIA’ unfortunately wasn’t ready by April for the Evia Rally Raid so the team wasn’t able to travel to Greece despite everybody had been preparing for this rally. As a replacement, Olivér Sólyom  – together with the sponsors – chose Hungarian rally XLavina Rábaköz Cup.

Olivér Sólyom: “It was literally painful that we weren’t able to travel to Evia! We really wanted to go as we love that rally and people there love us. But there were many difficulties with the car, some parts didn’t arrive on time or it even happened that we received faulty parts. After it turned out that we wouldn’t open the season in Greece, we immediately modified our plans and started to concentrate on the rally in Kapuvár, although we knew that the two events couldn’t be compared in any ways.” 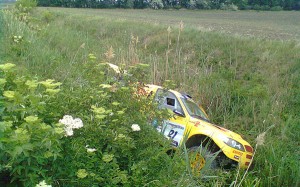 On the dawn of the start the mechanics had to change the transfer case but it turned out that the replacement had exactly the same failure as the other one so the change was in vain. Moreover, it turned out that Olivér had to be operated before the trip if he wanted to sit in the racing car during the weekend. On Thursday afternoon he was operated near his spine while the other members of the team were hunting for the new transfer case. Finally the team arrived to Kapuvár in the early hours of Friday.

The reconstruction of HAWKIA that lasted for half year got results: there were no major technical problems and by the end of the race the setup of the car also tended to be quite good.

Olivér Sólyom: “We got unused to this kind of rally but it was good for one race. We were able to test the car in race environment, and for us this was the important thing, we didn’t expect more. But we loved the fans, and also they loved us, maybe because we weren’t like the star drivers pulling a wry face and being extra serious… I owe a big big thanks to Miklós Iván who conducted the reconstruction works and to our permanent mechanics László Antoni, Zoltán Jakab and János Bonifác Orosz for their work, for working night and day to get the car work really well finally.” 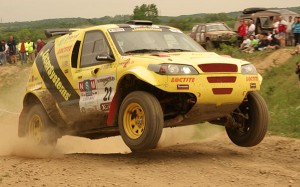 Mátyás Galbács: “Last year in the Balkan Championship I got used to working hard with the navigation, compared to that this time I hardly had anything to do. But the roadbook was imprecise at a lot of points, for example there was no sign of a big hole in the road. We drove in it and it threw the car to a four metre deep ditch. Fortunately neither us nor the HAWKIA was injured. Björn and Walter Hrabal the other crew of Sólyom team with car #38 pulled us out so we finished the special on time. We had only one major problem: because of a problem with the gasket of the exhaust system the smoke came into the cockpit and we had to complete two specials with both doors open. I am happy that it turned out what should we improve further on HAWKIA. I wasn’t present at the reconstruction of the car during the winter so I was surprised how much more reliable it became. It will be good for us!”

Results of the two cars of Sólyom Team at the Kapuvár rally: 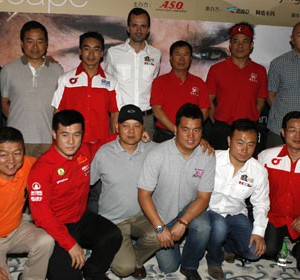 The Dakar World Tour stopped off last Tuesday in Beijing. The Chinese riders, drivers and constructors, who can already boast...
Copyright 2011-2016 Rallyraid.net - RISE Network. All Right Reserved.
Back to top