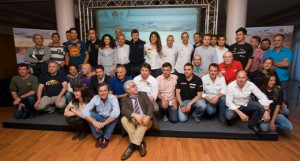 Preparations for the Dakar have already started for the competitors, and not merely the administrative part which involves filling in applications for the 2013 edition as from today. The Dakar World Tour’s visit to Spain gave the two runners-up from 2012, Marc Coma and Nani Roma, the opportunity to express themselves.

The applications to take part in the Dakar 2013 are now open. The rally organisers have already had confirmation, on the last European stage of the Dakar World Tour, that they will be receiving very serious applications from Spanish riders and drivers. In Barcelona, the statements of intent were especially ambitious, all the more so following an edition of the Dakar which saw two second-placed finishes go to two died-in-the-wool Catalans, Marc Coma and Nani Roma. The KTM rider gave some pointers on what his approach to the next Dakar would be to the journalists present: “This year was a disappointment, but I’m still intent on picking up a fourth title. In order to do that, I need to ride and ride and ride”. It would appear that Coma has started as he intends to go on, since he already boasts two victories, in the Qatar and Dubai rallies. He will be crossing swords again with Cyril Despres in June on the Rally of Sardinia. In the car category, the situation is different for Nani Roma, who finished the last edition behind his team-mate and friend Stephane Peterhansel. Nevertheless, the X-Raid will have to meet another challenge in 2013: “We are currently preparing tests in order to make the car just as competitive as always within the framework of the new technical rules that will be enforced on the Dakar”.

Yesterday’s meeting also underlined that the Spaniards will be aiming for a sort of Grand Slam, since Laia Sanz (who is currently dominating the world endurance championships) will be looking for a third consecutive victory in the women’s race, whilst Xavier Foj will attempt to retain his title in the production vehicles category. What’s more, the Spanish presence will be felt at all levels, because Viladoms, Farres and Barreda, for example, are all set on changing the hierarchy at the top of the bike category. And if that wasn’t enough, Spanish know-how in vehicle preparation and assistance is currently a leading export in the motorsport world: the experienced structures such as Epsilon or Jaton Racing are attracting more and more interest from South American competitors.

As a new proof of the importance of the Silk Way Rally in the world of motorsports, the organisers have signed an important...
Copyright 2011-2016 Rallyraid.net - RISE Network. All Right Reserved.
Back to top