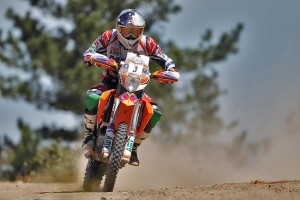 With his sights set firmly on yet another World Rally Championship title, KTM factory rider Marc Coma of Spain concentrated his efforts on Day Four of the Sardinia Rally Race on consolidating his second place in the overall standings.

Leading the 4-rally series, Coma only needs to finish second in this, the third leg, to seal the title – if his KTM teammate Ruben Faria finishes at fifth or worse. Faria was in eighth place in the points after Day Four. The final rally in the championship is the Pharaons Rally in Egypt in the autumn.

Riders have been struggling with intense heat on the Italian island during this round and the marathon stage on Tuesday had to be cancelled because of the threat of forest fires. On Wednesday they faced the penultimate day on a circular route that began and finished in Arbatax, a distance of 260 km, including 180 km of timed special. It was the longest stage of the 2012 edition.

As winner of Tuesday’s stage, Coma was first out of the start and had to set the pace and blaze the trail for the other riders. Overall leader, KTM rider Jordi Viladoms on the other hand was back at sixth and just needed to follow the leaders. The first part of the stage was very complicated navigation and Coma took the cautious approach and concentrated on bringing the KTM 450 EXC home safely in second to be sure to have a shot at claiming the world title after the third round. He was therefore satisfied to finish in fourth in the stage that also went to Viladoms and to sacrifice another 2.5 minutes to the leader. It was clear that on this occasion there is more at stake for him than the top of the podium at the end of the five-day ride.

Another factor in the race that is playing a major role is that it is much more akin to an Enduro event than a rally, which is why Coma is on the KTM 450 EXC and not his usual KTM 450 rally bike.

Regardless of what happens on the final day it looks like KTM riders will be well represented on the podium. KTM riders are currently 1-2-3 in the overall standings and there are six riders on the ‘Made in Austria’ bikes in the top 10. 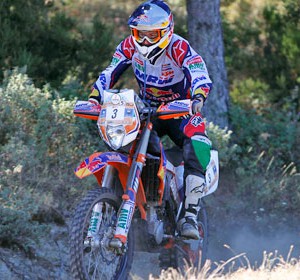 Another day, another story. So is the Sardinia Rally Race. Thatìs third stage, two days to go, and finally "senators" are getting...
Copyright 2011-2016 Rallyraid.net - RISE Network. All Right Reserved.
Back to top