Penultimate day of the Sardinia Rally Race. A single, magnificent special stage of 130 kilometers with start and finish in Arbatax, backdrop of stunning Heels of Ogliastra. The large “ring” of the penultimate stage of the Rally offers to the 95 competitors remained in the race fascinating landscapes, and astonishing competitive circumstances. Fast tracks, narrow trails, and “sharp” navigation features. And big space for fun. A tiring stage, tactically delicate. 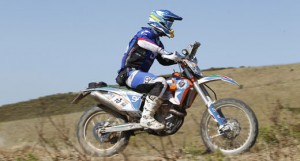 That’s another success for Jordi Viladoms, which doubles after winning the first leg of the marathon stage between San Teodoro and Sa Itria. The Rider Bordone-Ferrari Racing Team, which had suffered an attack of Marc Coma during the third stage, was able to administer the benefit in the next, returning to the formidable opponent only part of the five-minute lead. So, today, the leader of the general was able to take advantage of the situation, again changed in his favor. Coma started first and Viladoms could follow his former team-mate fully regaining the advantage lost yesterday.

Behind Viladoms were placed Joan Barreda, who finally was able to express its full skills, and Alesssandro Botturi, once again very confident and profitable. At one stage remaining, the Sardegna Rally Race final result is still open, presenting an exciting and tactically delicate as ever final. Viladoms, who start first by virtue of the success of today, must assume the burden of navigation. Coma, which is delayed by five minutes and a half compared to his former “water carrier”, will start from fourth place, six minutes later. Tactically, the situation is quite clear, but not “armored”. Theoretically everything can still happen, and the race to end with a new rotation. The two conclusive Special Tests are relatively short, and the risk for Viladoms is limited, but the Catalan should complete the race as he has conducted so far, providing further evidence of its increased technical skills. Once again, the Sardegna Rally Race “could” end of the wire.

Meanwhile, the Rally of Village Bike has already graduated a great Alexander Botturi. The Giant of Lumezzane managed to make that leap of quality desired by his mentor Renato Ferrari, who promoted his passage from Enduro to Rally. Botturi has become the new “striker” of the Italians, noting the position until now held in turn by Graziani, Mancini, Ceci.

Stephane Peterhansel has, at least in part, disappointed those who wanted him on the podium this year, but the French champion is still in sixth place, offering the show of his unique talent.

San Teodoro, Capital of Bike Village, is now waiting for the arrival the arrival of the fifth edition of the Sardegna Rally Race in the Piazza del Mediterraneo, and prepares to celebrate its Champions.

With his sights set firmly on yet another World Rally Championship title, KTM factory rider Marc Coma of Spain concentrated...
Copyright 2011-2016 Rallyraid.net - RISE Network. All Right Reserved.
Back to top