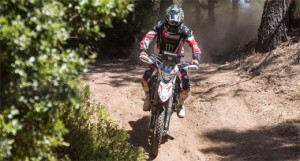 The second day of the Sardinia Rally started with the news for the Husqvarna Rallye Team by Speedbrain that Joan Barreda had been penalised. The Spaniard missed one turn-off on Sunday during the opening stage of this third round of the FIM Cross Country World Championship. Barreda didn´t gain anything as he missed the marked route in the roadbook, and even it was just for a hundred metres, he was penalised one hour for missing four GPS waypoints (4×15 min). The regulations ask for an extremely precise following of the roadbook.

“Hurricane” Barreda didn´t loose focus despite the discussions surrounding the decision. He started in a determined manner and after a few kilometres had caught Marc Coma, who had started in front of him. Barreda then crashed and finished the special test in fifth. Teammate Paulo Goncalves meanwhile put the hammer down on the stoney surface. The experienced Portuguese stormed to second place in the test and improved to sixth in the provisional standings.

The Speedbrain Husqvarna pair attacked again at the shorter special that followed. The 40-km short test was very winding and let through abundant vegetation – not to the liking of most of the riders. Joan and Paulo missed a hardly visible turn-off and lost valuable time on the leader. Others suffered from similar problems.

The Husqvarna TE 449 worked well for both, Goncalves maintained sixth place, Barreda even improved to a “virtual” second in the classification.

Team principal Wolfgang Fischer: “Both riders showed fighting spirit and mental strength. They didn´t allow the circumstances to discourage them. We have part one of the marathon stage behind us, with Paulo now in podium reach. Joan is far from the top because of the penalty, but he will certainly get on the gas at the upcoming special stages.” 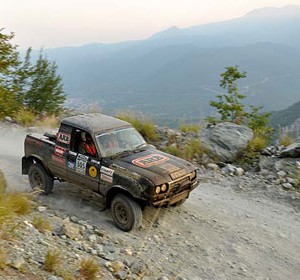 The licence-free "Balkan Offroad" Rally 2012 is the biggest rally in the Balkan Region and will be held from September 7th until...
Copyright 2011-2016 Rallyraid.net - RISE Network. All Right Reserved.
Back to top