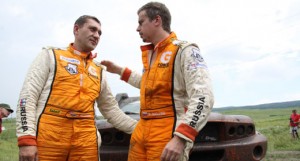 All competitors took the start of CP1 for the last stage of the race, shortened to 348 km. As they launched, leaders would not have in mind the misadventures they would have to go through during the day, but everything is possible in the Silk Way Rally, and victory is always at reach of an amateur crew that can prove outstanding motivation. The sun was shining up in the sky of the Adyguee Republic and the start of this last timed section was epic.

To begin, Pelichet, second overall, lost his rear axle of his Toyota Overdrive. After that, the race was taken by Alvarez while Lavieille (Proto Dessoude) stopped four times to repair a lose belt… and lost the lead too. At that moment, Gadasin (GForce) took over. The Russian, who also faced some mechanical issues, made it to the finish line 3’34 in front of the Hungarian driver Szalay (Opel) and 10’35 on Zapletal (H3).

The Argentinean crew Alvarez/Graue (Toyota Overdrive) made a great effort and finished close to the podium, in the fourth place, in front of Lavieille/Larroque, who crossed the finish line courageously. 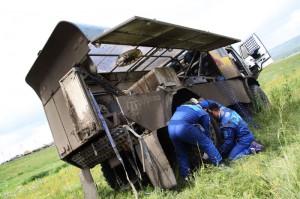 The scenario also had some changes for trucks. The leader Nikolaev faced an engine problem that hold him back from the victory. Four of his team mates helped him out: Ardavichus, Shivalov, Ilgizar Mardeev and Sotnikov. The triumph of the race went to the Kamaz crew Mardeev/Belyaev/Mirnyy.
Verslius, Damen and Schuurmans from Holland took the MAN truck to an important second place while the third place was taken by the Kamaz crew Shilabov/Amatych/Shaysuktano.
Loprais (MAN), who had all his chances to win, fall in a river and watch how that possible victory faded away.

Gadasin (GForce): “This morning I had to stop to change a brake disk rotor… during the time we were repairing, about 20 minutes, no one passed us. We thought other drivers were having troubles and maybe we had a chance to win. When we started again, I gave everything I could! I cannot compare this edition with the two precedent ones that I did not made it to the finish line, it was hard… so that makes me even happier with the results!”

Szalay (H3): “It was unexpected; I never thought it could end up this well this morning as we took the start! I have been waiting for a good result for such a long time. I am very pleased with this second place on the standings and with my first stage win in the Silk Way Rally. It is a hard race, navigation and steering wise and it is so well organized!”

Zapletal (H3): “We were trapped in the river for about 30 minutes, same place where Loprais had the problem! Then, we stopped in a village next to Lavieille to fill the windshield washer tank. This is the third time I take part of the Silk Way Rally and I haven’t finished the last two times. It is a great deal for me to cross the finish line of this magnificent rally. The surprising result makes it more than fantastic.”

Lavieille (Proto Dessoude): “The air conditioner compressor was broken and a pulley stopped working. Besides, the belt was broken four times. We only had three in the car… so we decided to keep on going slowly without it. Magnaldi charged our battery every 50 km… we trade”

Chabot (SMG): “We had a puncture, changed wheel and further, we had to stop to fix it again. We came here to work, and we know the car works well. Greetings to the organizer, that welcomed us with respect and hospitality. The Joker was that it is a great idea to let people continue the race. This rally has a soul… and we will be back next year.”

Mardeev (Kamaz): “It is hard to put all these emotions in words… the scores are unbelievable because I started this morning thinking about taking the third place. First thing I saw Loprais in the river… that was unexpected because I thought he would take time back on Nikolaev. Then, we arrived where Nikolaev was, out of the road too, and Ardavicus was already trying to help and the others were behind us. We kept on going and reached Versluis to control him, but not taking risks. In the last kilometers we had a puncture but I did not stop so we kept on going on three wheels! I heard we won when we arrived to the bivouac! I understood that in rally raid, mistakes are not allowed. The least error must be paid in cash immediately. The Silk Way Rally is really a great preparation for the Dakar!”

Versluis (MAN): “Yesterday we were second and this morning I thought it would be nice to be on the standings, but I didn’t think I was going to finish in this position! To tell the truth, we could have even won, because we had to stop for 25 minutes where Loprais was blocked. We decided to try to help him for 10 minutes, and then we continued to try to get a good result for the team…”

Shilabov (Kamaz): “I can’t believe we finished third! My goal was to finish among the first five, and that would have been already a personal victory! For me, the most difficult thing of the Silk Way Rally was the steppes of Astrakhan, very physically demanding. This rally was an extraordinary experience and I have learned a lot!” 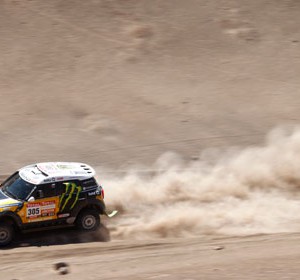 The X-raid Team is going to make the trip to South America for the Desafio Litoral – a new event on the Dakar Series calendar,...
Copyright 2011-2016 Rallyraid.net - RISE Network. All Right Reserved.
Back to top