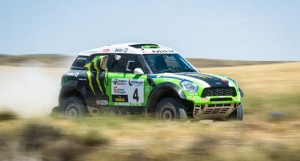 What a success for Team X-raid in the Baja Spain! In the first event following the rally break, the Trebur based team secured a fantastic result. French pairing Stéphane Peterhansel / Jean-Paul Cottret won the event with their green MINI ALL4 Racing, with Dubai’s Khalifa Al Mutaiwei and his German co-driver Andreas Schulz taking their MINI All4 Racing to second position. While Frenchman Jean-Louis Schlesser, Al Mutaiwei’s toughest opponent in the battle for the title, had to settle for finishing seventh, in the fourth round of the FIA Cross Country Rally World Cup.

In two of the four stages, Peterhansel was faster than his opponents. He won the 5.39-kilometre prologue on Friday and also proved to be the quickest in the second special stage (98.06km) on Saturday. Al Mutaiwei also delivered in great style, in Spain, and shone particularly on Sunday by winning the final special stage. He covered the 202.35 kilometres faster than anybody else, thus working his way up in the overall standings to finish runner-up.

“A very, very good result,” said X-raid Team Manager Sven Quandt. “Just great that Khalifa really went for it, today, and succeeded in passing Gadasin. In the previous special stages we mainly focused on consistency and doing so proved to be the perfect approach. And what can I say about Stéphane? He drove another very good rally and demonstrated that our new suspension works well.”

Meanwhile, a part of the Monster Energy X-raid Team travelled to Argentina, a few days ago. The reason: the Desafío Litoral, a rally on the Dakar Series calendar. In this event, Team X-raid will be represented by Nani Roma (ESP) and Michel Périn (FRA) in the yellow MINI ALL4 Racing as well as two BMW X3 CC vehicles that will be raced by Orlando Terranova (ARG) / Paulo Fiuza (POR) and Boris Garafulic (CHI) / Gilles Picard (FRA). Over the course of the six-day rally that will be started at Iguazu, well-known for its imposing waterfalls, the competitors will have to cover some 1600 kilometres to the finish Resistencia. 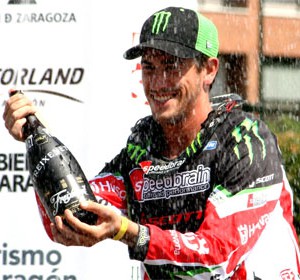 Baja Spain-Aragon finished with few surprises in sports facts and some in the institutional area. The announcement made on Friday...
Copyright 2011-2016 Rallyraid.net - RISE Network. All Right Reserved.
Back to top