The X-raid Team is going to make the trip to South America for the Desafio Litoral – a new event on the Dakar Series calendar, held from 23rd to 28th July – with three cars. In addition to the two BMW X3 CC drivers already confirmed, Boris Garafulic (CHI) and Orlando Terranova (ARG), Spain’s Nani Roma also will race the event in Argentina – at the wheel of a Monster Energy MINI ALL4 Racing.

In May, the ASO announced an additional event to be added to the Dakar Series calendar: the ‘Desafio Litoral’. The newly created rally will be started on 23rd July in Igazua, Argentina, that it famous for its waterfalls regarded as one of the seven natural wonders of the world. From there, the six stages of the event will take the competitors across Argentina to Resistencia where the drivers will cross the finish podium on 28th July. The special stages supposed to be held in Paraguay had to be cancelled due to the political instability in the country. 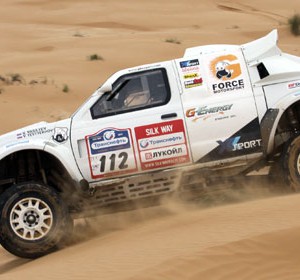 As the Tibetan lamas prayed all night for the Silk Way Rally, the sky was cleared and competitors enter the fourth special...
Copyright 2011-2016 Rallyraid.net - RISE Network. All Right Reserved.
Back to top