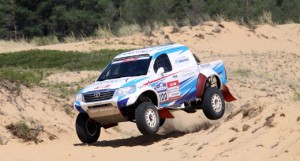 Overdrive Racing finished fourth overall in the gruelling Silk Way Rally, which finished in Maykop on Thursday  – a day earlier than planned because of the extreme flooding that had affected the Gelendzhik region of Russia, near the Black Sea.

Argentinean driver Lucio Alvarez and co-driver Bernardo Graue brought their Toyota Hilux home in fourth after lengthy delays with a steering pump problem on the third stage, but the French Overdrive Racing crew of Jérôme Pelichet and co-driver Xavier Panseri lost their chance of a top finish after damaging the rear suspension on the final stage.

“All in all it was a good race for the team and, once again, the Toyota Hilux showed its pace,” said Overdrive team director Jean-Marc Fortin. “It’s a real pity about the steering pump failure on Lucio’s car on the third stage that cost him his chance of victory, but I think both he and his co-driver have gained valuable experience in preparation for Dakar 2013. 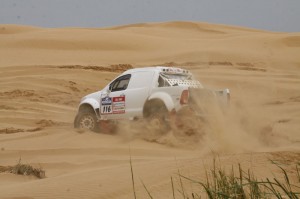 “Jérôme and Xavier have done a great job and I am very impressed with the speed they have shown during the entire event. I think they will definitely be a crew to watch out for in the future. I give a special thanks to the entire Overdrive team for the hard work on the race, especially when we take into account the weather conditions.”

Gadasin pipped Frenchman Jean-Louis Schlesser to the fastest time by just 11 seconds on the opening special stage between Ryazan and Volgograd last Sunday, with the Overdrive duo of Alvarez and Pelichet starting well in third and seventh positions. “This was the first time I drove the car and I think it is exceptional from every point of view,” enthused Pelichet at the stage finish.

Alvarez and Pelichet moved into the top two places on the overall leader board on the subsequent Volgograd loop stage – where Schlesser crashed and was airlifted to hospital for treatment to a hand injury.

But steering pump problems  and getting stuck in the dunes cost the Argentinean around 90 minutes on the third stage into Elista, where atrocious weather conditions failed to prevent Frenchman Christian Laveille from setting his second fastest time in as many days to claim the initiative in the car category from Pelichet and Gadasin. “I enjoyed the stage, but got stuck in the sand twice and damaged the back left wheel,” said Pelichet.

Vladimir Vasilyev was quickest on the 506km loop stage around Elista on Wednesday, where Alvarez set the second fastest time and Laveille came in third.

“The stage was beautiful and the car worked perfectly. Now that I don’t have pressure to be in the podium anymore I enjoyed it, especially during the 60 km that I drove full gas with the trucks of Loprais and Nikolaev.” said Alvarez.

Balasz Szalay won the final stage into Maykop, where Alvarez recorded the second fastest time – despite getting stuck in the mud for 15 minutes – and Gadasin did enough in the muddy conditions to claim outright victory. Pelichet started the day fifth on the road, but was badly delayed before the first passage control after damaging the rear suspension. 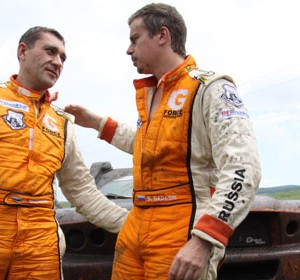 All competitors took the start of CP1 for the last stage of the race, shortened to 348 km. As they launched, leaders would...
Copyright 2011-2016 Rallyraid.net - RISE Network. All Right Reserved.
Back to top