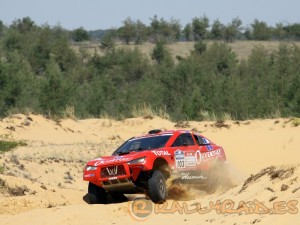 The sun was up high when Gadasin left the bivouac this morning at 7h15 for a 120 km road connection. The start of this loop stage was given in the Archendinsky Forest but it didn’t take long for competitors to find the sand and open the track in a hard stage. Sudden dunes, lack of visibility and off-road… over one of the harderst stony surfaces and a very delicate navigation. In summary, a great day of rally raid!

For Jean Louis-Schlesser, the day didn´t took off in the best way. The Frenchman rolled over and was evacuated by a helicopter to the bivouac of Volgograd with his hand injured. “The hoof of the car was detached, and we stopped to take it out, but we could not get all the screws out. After a moment we decided to continue like that, thinking it would go away, but it is a metal plate, and in the sand, it got stuck over the back tire. This made us fly and we rolled over while we were driving at 50 km/h,” explain the driver as he left the medical tent.

Rescued by the doctor from the helicopter of the race direction, Schlesser was taken to the medical bivouac. “Two fingers of my left hand are cut opened, so I will go back to France to get surgery.” His navigator, Konstantin Ziltsov took the buggy back by the road.

Yesterday´s bad luck of Christian Lavieille and co-driver Pascal Laroque was revenged with a stage victory. “We were stuck behind the MAN for many kilometres, and I have to leave the road to overtake them. We made the horn sound, and they would not let us through. The sand was soft and tires well inflated, so this was a delicate operation… At the end of the stage, everyone was lost, and we also made a mistake before finding the right track. It was a great day!”

The surprise of the day was the Ukranian Vasilyev (GForce) who took the start in the 95 position and finished second! (car and trucks classification are mixed into one). “Yesterday I had mechanical problems, I couldn’t get out of a hole and I had to wait for my assistance… That is why I started so far behind, behind all cars and trucks and I had to overtake them. I think I passed about fifty vehicles… but I really liked today´s tracks,” states the driver. 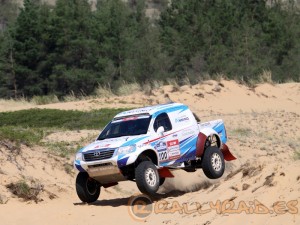 Alvarez stays in the third position after having troubles in a river passage, but takes the lead in the overall in front of Pelichet, Gardemeister and Lavieille.

Ronan Chabot and Gilles Pilot were the fastest to make it to CP1, but the crew finished fourth of the day. “We got lost at the end of the special stage, but the first part of it was just wonderful with dune passages and ruts… the second part was not that great for the buggies with the fast tracks, turns and lots of navigation. Anyways, we know that the buggy can do it!” said Chabot.

Jerome Pelichet (Toyota Overdrive) had an outstanding special stage. “Cool!” was the word he used to described the day while taking the fifth position in front of Zapletal, Gardemeister, Savenko, Khale and Gadasin, who lost the lead after stopping for fifteen minutes. “The fuel pump did not work and I had to stop to repair it… then we got lost. Yesterday was definitely better,” said the Russian driver that share the same lack of luck with Hungarian Szalay that takes the tenth place.

Thierry Magnaldi (Buggy Dessoude) did not have a better day than his colleagues. First he got stuck in the sand and then he had to face a problem in the carburant circuit. 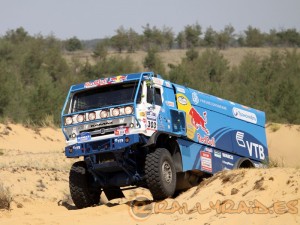 Mardeev takes the stage win in trucks. The Kamaz marked 3 minutes and 11 seconds of advantage over Nikolaev, who had some orientation issues but did not have any problem in the sand. “It was very exciting. Yesterday was a warm-up and today we started the real race. I hope to be in good shape. I did like the special today, but navigation was difficult,” said the stage winner. On his side, Loprais (MAN) got lost and takes the third position of the day.

After a long road connection completed in two phases, competitors took the start of the first timed section 258 km. The track,...
Copyright 2011-2016 Rallyraid.net - RISE Network. All Right Reserved.
Back to top