After a long road connection completed in two phases, competitors took the start of the first timed section 258 km. The track, typical of steppes of central Russia – with 70% of Savannah track types and 30% of sandy tracks – left room to measure steering and navigation.

At Volgograd bivouac – ancient Staliningrad, located at the West side of the Volga- the sun welcomed all competitors. 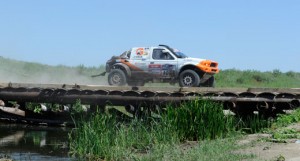 Boris Gadasin (GForce) conquered the first day with a victory and took the stage win 11 seconds in front of the French driver Schlesser (Buggy Schlesser). “This is a great surprise for me – explains the Russian driver – because I did well, and I won the first special stage. This is my third participation in the Silk Way Rally, the first time I came, I rolled over 12 times, second time I broke the engine and this time I really want to make it to the finish line. Tomorrow we must open the track, but I will not change my strategy.”

For Jean Louis Schlesser, the tracks were pleasant. “No stones, we did not get lost or anything. It was a beautiful steering special. The ground was quite favorable to two wheel drives but the 4×4 are very fast,” states the Frenchman. 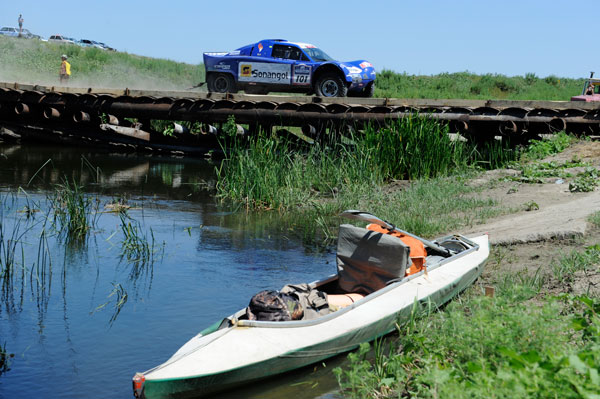 Third, the Argentinean crew Alvarez/Graue (Toyota Overdrive) got lost for about four kilometers in the savannah, where tracks were not completely visible.

If Matthias Khale (Sam Mercedez) takes the fourth position in front of Novitsky, it must be highlighted the outstanding performances of Gardemeister and Gerome Pelichet. Gardemeister finished sixth today, in his first participation in a rally raid race, while Pelichet is seventh with the Toyota Overdrive. “This is the first time I drive this car, and I think it is exceptional from every point of view I look at it,” says Pelichet.

Thierry Magnaldi and Jean-Paul Forthomme (Buggy Dessoude) stepped on the eighth place. “I drove  calmed and clean, because navigation was not given and we are also driving the new car body for the first time,” explains Magnaldi.

Chavigny and Brucy (Proto Dessoude) finished tenth after a day without any stories.

Christian Laveille was heading the stage at CP1, but he stopped for about 20 minutes at km 165 due to an oil leak from the front radiator.

Ronan Chabot and Pillot (Buggy SMG) also stopped for 20 minutes to identify an electrical problem at kilometer 140. Errandonea and Garcin also had some misadventures in this first race day. “We had a puncture at km 80. The tire exploded! We also got lost for 6 kilometers and got stuck in a river passage,” confesses the Basque.

No luck at all for Huzink and Baumel, who’s Mitsubishi Lancer burnt at kilometer 195.

In trucks, the victory of this first stage was taken by Nikolaev on Kamaz, almost 5 minutes in front of Loprais’ Man truck. They are followed by Mardeev (Kamaz), Verluis (Man) and Shibalov (Kamaz), while Van den Brink on his Ginaf takes the seventh place. 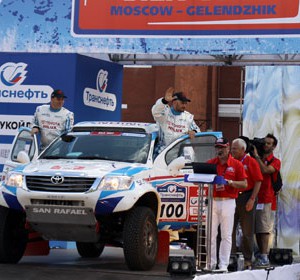 Yesterday, along with a sunny warm day, the participants of the fourth edition of the Silk Way Rally completed the technical...
Copyright 2011-2016 Rallyraid.net - RISE Network. All Right Reserved.
Back to top