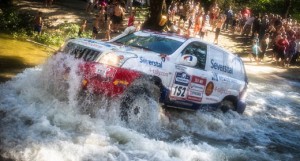 This year Organizers considerably improved a route, having added new sand and the dunes, new regions  in Elista and Stavropol, and also the best since 3 years logistic and Bivouacs on all the route.

Internal “kitchen” of any race is life of each team, taking part in it. And so the international staff of participants attended  «Silk way rally 2012» made this “kitchen” especially spicy and sharp.

The team 4RALLY for the first time started in this race even though one of the crew – Pavel Loginov and Anton Pletenev passed all 3 previous editions of the «Silk Way Rally» and had the experience. As to the second crew, Vadim Saveliev and Ariel Jaton, the Russian-Spanish duo really debuted in race. The technical aspect, meaning the sports cars and their service on race, were completely under the responsibility of Spanish 4WD Jaton Racing team.

So the first stage started and… Saveliev/Jaton rolled over on the ford! 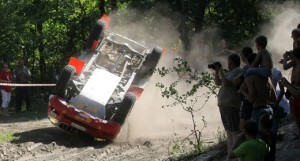 V. Saveliev:« The first feeling from this day – as though there passed a whole week, not just one day. Long distance of liason section was quite wearisome, and we started at a stage already in a condition of some fatigue. The stage turned out very interesting – the first sites rather fast, and we were in time to adapt the car and speed, and in the second half there was a small incident on the ford. By the way this ford was not correctly pointed in a legend and at turn to the river, I saw a large number of spectators and began to sprain to the river to cross the ford directly, instead of on a diagonal, and tightened too strongly. Further everything occurred as in the slowed-down cinema – we at first laid down sideways, then hung on belts head over heels. Switched off ignition, and spectators quickly enough put us on wheels, and we continued race. Except a windshield no damages existed, but to be sure we went very carefully for some kilometers after the ford, listening to the car to reveal the possible hidden mechanical problems. We are on the finish, received a new experience, and of course, we will work for ourselves further».

For the second crew of 4RALLY team – Pavel Loginov and Anton Pletenev the day was rather good and no technical problems arose. The pilot and co-pilot adapted for a race mode, got in close touch with new evolution of the car and during the route tried to go reliably and without risk.

The second stage of “Silk Way Rally 2012” prepared for the team 4RALLY and all rally participants a lot of difficulties – sportive and technical.

After short liason participants started on the 309 km special stage. Sand and steep dunes, viscous sandy sites and navigation – all were in the agenda in alternation with technical stony paths and exhausting heat.

For crew  Pavel Loginov and Anton Pletenev this day began not in the best way.  The clutch stop working 12 km after start and the crew was compelled to go for a bivouac on asphalt. 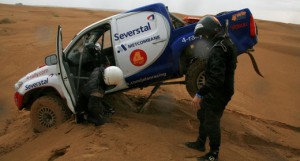 All second half of day and night the mechanics of 4WD Jaton Racing team worked over problem, having organized substitute of clutch and its separate components. And commissioners of rally visited meanwhile a bivouac 4RALLY to tell to Pavel that according to regulations he can continue race on system “super rally” with a penalty, but use such chance (called “joker”) it is possible only once!

V. Saveliev: “Today we decided to go for ourselves accurately and at the pace.  At the beginning of stage many cars overtook us, but having approached on sand, we saw that all these competitors got stuck in sand, or driving wrong ways in search of control points. We passed a sandy piece without problems, and even it was possible to take one quite difficult point which Organizers established directly on a dune without mistakes. In the second half we increase the pressure in tires though there were a little more sand, but generally character of surface already exchanged on fast roads. Interaction with the navigator turned out today much better as I began to understand him more, considering that Ariel speaks English with accent, and he adapted for my requirements already and read a legend in more clear format. So the day was difficult and saturated, but very successful for our crew. Race proceeds, still everything is very unpredictable and it is necessary to be in the maximum concentration”.

So at the end of the day it can be concluded that the team 4RALLY continues race in full staff and with “joker” uses!

The sporting program of the third day of the race have reduced because of bad weather conditions. Since the morning around the track of route Volgograd-Elista has gone a heavy rain which has made a part of track almost impassable.  Competitors drove down the asphalt up to km 212.87 to take the start of this third special shortened to 275 km.

In this part of the timed section, tracks were rare, and navigation is often practiced off-road. The track took competitors to sandy areas in the small dunes and the Scorpion Erg in the end of the steppe.

Vadim Saveliev with the Spanish navigator Ariel Jaton have started on 32nd place, and on a course of special stage stably kept a position, despite a number of technical troubles. For example, from the start the spray jet on a washer of glasses badly worked that complicated visibility. Then they have passed a hole and  the wheel was damaged and the brake hose has torn. As a result more then 20 minutes have been lost for repair and on finish the crew has received 39th time of the day.

Good revenge have been organized to itself by Pavel Loginov and Anton Pletenev. Having started at a stage on 66th position, they have come along on finish with 36th result! 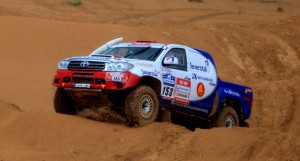 P.Loginov: «The most important thing that today has ended with finish, because two previous days pursued us technical problems. The track of the special stage was enough high-speed – fast tracks with jumps, therefore all the time we drove in “full gas” mode with a speed of 130-140 km/h. As the real rally-raids guys we have tested ourselves in sand, having stuck once for a 5-7 minutes, and also have actively fulfilled both piloting and navigation. The last rains have transformed a surface into a slippery dirt, the car threw out from a track, constantly it etc. There was no mistakes in navigation even it was not easy and during this stage we have overtaken about 30 cars and have executed a task in view to rise in standings, tomorrow to start from more advantage-ground. All is excellent, we are very happy this afternoon».

Final two days of race became the most exciting and the sports intrigue managed to be observed up to the last kilometer.

From Volgograd the storm rain and heavy clouds continued to pursue rally in Elista. The rain poured all night long therefore the fourth stage Elista-Elista was reduced again from 506 km to 380 km.

Start was given in time, and exactly in the 7a.m the first car left the bivouac in direction of Utta.

For the fourth day of rally participants should overcome the big sandy massif, the steppe roads winding among saline soils, and also the droughtiest part of the Astrakhan desert.

The day before Organizers declared that rally comes to an end for one day earlier in Maikop in solidarity with the tragedy in Krasnodar Krai, many considered this stage as the last chance to improve result or to fix a position.

P. Loginov: «The first 100 km passed in good speed and we overtook two cars. The first sand further began, and here we felt a smell of clutch, axle boxes on the third, axle boxes on the second, and the car stopped. We made a pause to think over further actions and while thought, clutch cooled down. Then we continued following the track, trying to bypass big “sandboxes” that was cost to us four missed control points, and nearly four hours of time we spent for passing this sandy part of the route. The technical component didn’t allow to go on sand, we several times got stuck, got under terrible heavy rain so tension was at peak. Finally, we left on more rigid covering, and clutch started working. During the course Vadim caught us up, but then they lost the way, and on the finish we showed the first result in team 4RALLY. As a whole, it is happy in the afternoon as the main result is a finish!».

V. Saveliev: «Today I understood that I only started to enjoy this race, therefore it’s a petty very much that tomorrow there is the last stage».

Final day of rally passed again in the reduced format. Results of leaders on the fifth special stage with distance of 348 km became so unpredictable that participants for a long time couldn’t believe in it especially the winner of race Boris Gadasin who finished 3’34 in front of the Hungarian driver Szalay (Opel) and 10’35 on Zapletal (H3) and became the first Russian pilot who ever win the “Silk Way Rally”.

A thrilled end of the rally could happened with the pilot 4RALLY Vadim Saveliev who managed  to fail in a mud hole 500 meters before the finish. The foreign truck which was going in race after Vadim quickly pulled out the Russian-Spanish duo from a trap. The crew finished the 19th in the overall and the 3rd in category diesel Т2. Also the second crew of team – Loginov Pavel and Pletenev Anton  are classified on the 51st position. Such result would be much better if the crew did not take the 150 hour penalty for the finish by asphalt on the second day of race.

Thus, the fourth edition of race came to the end on a positive note. The team 4RALLY in full staff reached the race finish, having continued the stable series opened in Morocco in 2011. 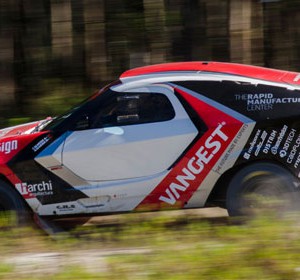 For over 26 years, the VANGEST group specialized companies have developed unique expertise for the design, engineering, prototyping,...
Copyright 2011-2016 Rallyraid.net - RISE Network. All Right Reserved.
Back to top