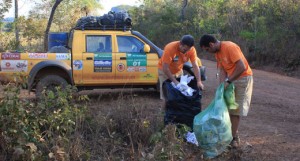 Rally dos Sertões begins within ten days, starting in São Luís (MA) and arrivaing in Fortaleza (CE). A 4,840 km route inside the Brazilian North and Northeast and 220 registered competitors in the category Cars, Trucks, Motorcycles, Quads and UTVs. With a caravan that will displace more than 1,700 people around eleven cities that will host the competition, a complex work is carried out eleven years ago to reduce the environmental impact of the race.

This function belongs to the group “Canastras”, coordinated by Carlos Roberto de Andrade. The environmental action in Sertões was awarded in 2007 by ULM (Latin American Motorcycle Union) and in 2009 by the FIM (International Motorcycling Federation) by service performed during the event. “It is a work operationally consolidated because they also invest a lot in raising awareness of all the staff involved in the rally”, says Andrade.

Last year, one thousand of ecological ashtrays were distributed, four thousands bags of 100 liters for waste collection and two thousands fabric waste bags for the vehicles. Also, group members meet with the competitors to talk about the importance of proper disposal of waste. 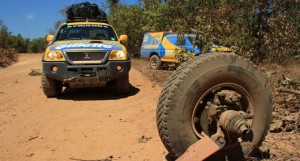 “The average annual payment on the tracks dropped sharply thanks to the work of awareness. Previously we took many things from the start and finish. It is pretty normal to find it on the trail, because there are accidents, falls, technical problems with the competitors … But in previous years came to collect up to two tons. And in recent years this number has dropped significantly. Last year, for example, we had collected around 900 kg total “, said Andrade.

In 2011, according to the director of Canastras were collected as 678 kg of waste tires, parts of fiberglass, steel, aluminum, and paper and plastic in the trails, 25 liters of oil (via a system of absorption) and 11 tons of garbage in 11 camps.

Much of the material removed from the track can be reused, and it is delivered back to the teams. The group uses a Mitsubishi L200 Triton 4×4, satellite navigation equipment and radio communicator, since the teams have the responsibility to warn Canastras on parts that are released from vehicles. One of the four members shall be responsible for taking care of cleaning the camps. 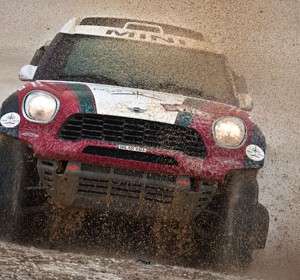 There is a substantial interest from all over the world for the Hungarian Cross-Country World Cup event will be held at the end of August,...
Copyright 2011-2016 Rallyraid.net - RISE Network. All Right Reserved.
Back to top