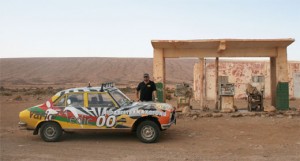 In it’s 8th year the world’s largest amateur rally, the Budapest-Bamako will return to the African continent on January 25th 2013. We spoke with the rally’s founder Andrew G. Szabo who has some great plans for this year’s rally.

What are the plans for the 2013 Budapest-Bamako and how are the preparations coming along?

Thing are looking really well for 2013. We’re about to close the entries. We have the highest number of participants since 2010. The interest in the Budapest-Bamako clearly shows that the spirit of the old Dakar is alive and well. Africa and the Sahara is still as fascinating as ever. We have an amazing route planned out for this year. We’re going to see more desert driving. In Mauritania  the race category will drive on the demanding Bou Lanoar Chinguetti stage along the train line of the Sahara. In Chinguetti teams will visit the legendary Saharan city which is now part of the UN World Heritage and is a place to find and buy meteorites and dinosaur fossils. Chinguetti to Tidjikja and Chinuetti to Kiffa will be demanding and complicated for both drivers and navigators.

In previous years you’ve reduced the number of days in Mauritania. It looks like you’ll be spending more time there this year.

Mauritania is one of the most fascinating countries in the world. The landscape is out of this world. The people are friendly and the desert is raw, untouched, the way it’s been for thousands of years. As far as off-road driving goes, there aren’t too many places where you can drive continuously and safely a thousand kilometers on sandy tracks. Mauritania’s safety record has improved greatly and we have an amazingly strong relationship with the local security forces. Mauritanian soldiers who guard the Budapest-Bamako bivouacs are looking forward to our arrival each year.

What about Mali? The country has broken up and there’s a lot of uncertainty. Is it safe to drive through Mali?

African travel has always had a sense of danger and uncertainty. This has not changed in the 21st century. The north of Mali has fallen into the hands of former Qaddafi fighters. The rest of the country is fine and secure. There’s no war between the two sides. We’ll go to Mali in September to personally asses the situation. We’re expecting conditions to improve. If the political climate changes we will divert the rally to Senegal. In Africa you always have to have a plan B.

What do you think attracts so many people to your rally? What’s the allure of the Budapest-Bamako?

It’s the spirit of adventure and freedom. In Europe or America you can’t just drive on any dirt road. You need permits. You can’t set up your tent on the beach and watch the sunset by the side of you. You can’t spend two weeks with your friends during rough and amazing times. The Bamako is about doing all that. It’s also about time travel as well. You go back hundreds of years each day as we go deeper in Africa. By the end of the rally we see tribes who live the way our ancestors lived 2000-3000 years ago. It’s a spiritual experience.

The rally will have two finish lines this year. Why is that?

The racing category will officially finish in Bamako. From here on we’ll have four bonus days to get to Guinea-Bissau. This is a very small country on the Atlantic Coast. The rally finished here last year and everyone loved it. So we decided to make the adventure last longer this year and after the award ceremony and the official finish people can choose to drive 4 more days through Guinea and Guinea Bissau. The rally has never been to Guinea so it should be an exciting drive.

The racing category is always more demanding. The Budapest-Bamako is not a timed, speed race. It’s a navigational and endurance race. Teams have to be able to manage their GPS, their maps and have to be able to get out of the car to find the right tracks. There’s no set itinerary. This year the navigational challenges will be harder and we expect the race to be more demanding physically. The Mauritanian desert sections will decide the outcome of the challenge for sure. In 2009 we had to cancel and entire day because so many people got stuck in the Sahara including our own medical team on similar sections.

What’s your favorite memory of the Budapest-Bamako?

I could write an entire book about my favorite memories. There are just too many. What touches me every year is the hospitality of the people. One evening I was lost near Smara in Western Sahara. The area is heavily land mined. I didn’t want to blow up. I saw a nomad family in an old Land Rover nearby I asked the old man of the family for directions. He told me it’s too dangerous to drive at night. He invited me to dinner by their campfire. He baked bread in the sand and in the morning he showed me the safe track to Smara. It was a life changing experience. There are thousands of stories like this.

Do you remember any particularly dangerous situation?

Danger is never far away on a rally like this. This january two Norwegian quad riders got stuck in deep mud near the ocean after sunset. One of them managed to get out, but the other one was stuck for the whole night. He was frightened. It was 150 kilometers from the nearest town. We also had people fired on by angry forest rangers. Luckily no one was hurt. There are accidents, injuries and broken dreams every year. Two years ago a Polish truck driver lent his truck to his inexperienced girlfriend on a short, paved road liason stage. On the 50km short stretch she overturned the truck and her boyfriend nearly died.

For more information about this year’s rally visit: 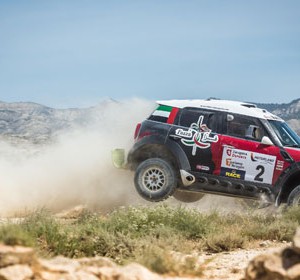 Dubai’s Khalifa Al-Mutaiwei and German co-driver Andreas Schulz will target the outright lead in the 2012 FIA World Cup for Cross-Country...
Copyright 2011-2016 Rallyraid.net - RISE Network. All Right Reserved.
Back to top