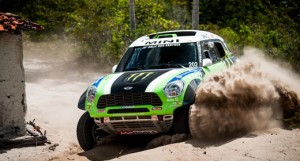 During the course of the first days of the event, the Rally dos Sertões across Brazil proved to be rather emotional for the X-raid team members and drivers, Stéphane Peterhansel FRA)/Jean-Paul Cottret (FRA) in the MINI ALL4 Racing and Riamburgo Ximenes (BRA)/Flavio França (BRA): party atmosphere in Sao Luís, the venue of the start, amazement at a water crossing on day one and joy about Peterhansel’s win in the second special stage. In the overall standings, the Frenchman currently holds second position, right ahead of his Brazilian team-mate.

On Saturday, Peterhansel and Ximenes had to contest the prologue as start into the Dos Sertões. At the beach of Calhau, the Frenchman won the 1.7-kilometre prologue, with Ximenes finishing third. In the evening, the best eight drivers of the prologue battled it out with one another once again – in the ‘Super Prime’ held on the occasion of the Dos Sertões’ 20th anniversary. More than 11,000 motor-racing enthusiasts came to the Arena in the Sao Luís shopping mall and celebrated the drivers.

On the day following the party in Sao Luís, things got more serious: the first 365-kilometre special stage to Barreirinhas, featuring sand tracks and several water sections. At kilometre 266, however, the competitors of the car category couldn’t continue due to a water crossing being just too deep. So, they contacted the race control that opted for aborting the special stage and using the times achieved at the 223.17-kilometre check point as result. So, special stage one was won by Guilherme Spinelli, with Ximenes in the BMW X3 CC following in second position and Peterhansel taking his MINI ALL4 Racing to fourth place.

Following the exciting start into the rally, the second stage – to Bacabal – could be contested without any unscheduled difficulties. Peterhansel won the special stage with a lead of nearly two minutes over Spinelli. In the overall standings, his gap to the still leading Brazilian now amounts to just three seconds. Ximenes came sixth, in the second special stage. 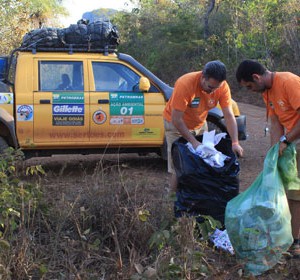