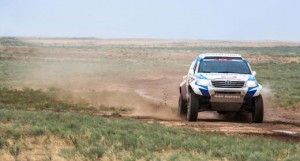 Overdrive Racing has pieced together a last minute agreement to run the Hungarian driver Erik Korda in this weekend’s Baja Hungary – the fifth round of the 2012 FIA World Cup for Cross-Country Rallies. Korda will team up with co-driver Csaba Fábzán at the helm of one of the Belgian preparation company’s Toyota Hilux off-road racing vehicles, which have already finished first and second overall in this year’s Sealine Cross-Country Rally in Qatar.

“Erik has had interest in the Hilux for some time, so it is great that he will be behind the wheel of the Toyota in Hungary,” said Overdrive team director Jean-Marc Fortin. “We hope, once again, to put on a strong performance and also to validate some of the developments that we have worked on this year. From my experience the race can be quite tricky and with the strong field it should shape up to be very interesting.”

Korda is one of the most experienced of Hungary’s off-road drivers and has been a regular competitor in cross-country events for several years. He was the first driver to get behind the wheel of the McRae-Enduro car in 2008 and has driven a wide range of other 4×4 vehicles on European events. Korda has also driven on more conventional special stage rallies at the helm of a Subaru WRC car.

Baja Hungary has attracted a provisional 30 starters in the FIA international car category, with Korda set to compete against the likes of two-time Dakar winner Jean-Louis Schlesser and his main FIA World Cup rival Khalifa Al-Mutaiwei.

The Overdrive Racing Team begins its weekend’s competition after the official start in the town of Gyor on Friday evening – Korda will then tackle a 4.89km super special stage in Ifari Park. Crews will tackle a pair of special stages twice on Saturday, with the first 51.80km selective getting underway at 10.45hrs and the second, longer 71.67km starting at 12.14hrs. These two timed tests will be repeated on Saturday afternoon.  Action draws to a close on Sunday with a run through a 52.32km stage and a third pass through the 71.67km stage between Mihalyi and Vitnyed. The podium finish will take place in Gyor later that afternoon. 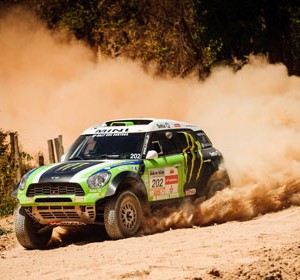 With four stages of the Rally dos Sertoes in Brazil contested, Stéphane Peterhansel/Jean-Paul Cottret in their MINI ALL4...
Copyright 2011-2016 Rallyraid.net - RISE Network. All Right Reserved.
Back to top