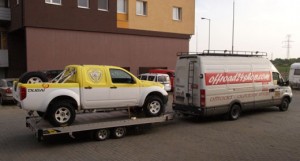 Just hours before the start of 9th Hungarian Baja surprising news came from Bratislava, Slovakia. Raid Adventure Team, regular competitor of many European races and also the first Slovak team to enter Silk Way Rally, will now join those such as Jean-Louis Schlesser, Khalifa Al Mutaiwei or Boris Gadasin on HunGarian Baja, the fifth round of FIA World Cup.

The provisional leaders of production cars group ranking, Yahya Al Helei and Khalid Al Kendi from Emirates have turned to Raid Adventure Team with a request to hire their own-built Nissan Navara and to support them on Hungarian race. The one of a kind Nissan Navara D40 Doublecab was built in cooperation with O.R.C. s.r.o. to comply with FIA T2 group rules and made its debut in 2010. Since then the team scored four international titles including FIA Central Europe Zony Trophy and class podium finish on Silk Way Rally.

Yahya Al HELEI is a veteran of many desert races where he regularly puts himself amongst the best. He has got some remarkable results to his name, this year he won two races of FIA World Cup in Abu Dhabi and in Qatar. He is very skilled with different types of rallies and cars.
Khalid Al Kendi is Al Helei’s long time co-driver with plenty of experience. Al Helei can trust him fully.

Raid Adventure Team will support the Emirati duo on a high level performance which is vital in order to achieve a good result.

“The Navara was reliable so far, our results easily prove that,” says Juraj Ulrich, team driver and car constructor. “For it is a car we have built ourselves we know it to the last bolt and we made our best to get it ready for this race.”

“We are pleased and honoured that such an experienced crew have chosen our team to collaborate with. I hope we will be able to do everything to help them on their way to a World Cup win,” adds Daniela Ulrichová, team co-driver. 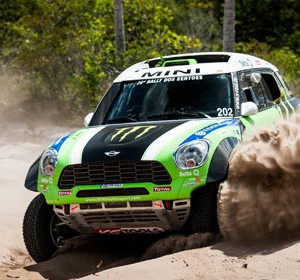 During the course of the first days of the event, the Rally dos Sertões across Brazil proved to be rather emotional for the X-raid...
Copyright 2011-2016 Rallyraid.net - RISE Network. All Right Reserved.
Back to top