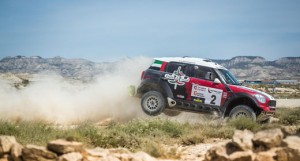 Dubai’s Khalifa Al-Mutaiwei and German co-driver Andreas Schulz will target the outright lead in the 2012 FIA World Cup for Cross-Country Rallies when they tackle this weekend’s Baja Hungary. The Fazza Rally Team star, who drives a Mini All4 Racing in the world’s premier off-road series, currently trails twice Dakar Rally winner Jean-Louis Schlesser by a single point in the fight for the world title and is confident that he can overtake his French rival at the fifth round in Hungary.

World champion in 2004, Al-Mutaiwei has made a superb return to the sport this season after a near eight-year absence. “Here we are in the second part of the season and now I am in a far better condition that at the start of the year,” said the Emirati, who will be bidding to become the third X-raid team driver to win the event in five years.

“I have gained confidence and more experience as the season has progressed. I know much more about my car and am more in harmony with the team. I am only one point behind Jean-Louis Schlesser in the championship and well clear in second place. My goal is to finish on the podium for the fourth time this season.  “This is my first time in Hungary. It is a Baja and not a traditional cross-country rally, so there is a different approach. There is no chance to make a mistake. I will try and find the balance between pushing, attacking and being cautious at the same time.”

In addition to facing his experienced French rival Schlesser, Al-Mutaiwei and Schulz will line-up alongside the Russian duo of former winner Boris Gadasin and Vladimir Vasilyev, who currently holds fifth in the points’ standings.

The FIA cars’ category is further boosted by the presence of 2007 Baja Hungary winner Miroslav Zapletal and the Ukraine’s Vadym Nesterchuk among the provisional 30 starters on the international entry list.

The Fazza Rally Team star begins his weekend’s competition in the X-raid-built Mini with the official start in the town of Gyor on Friday evening at 6pm (local time). He will then tackle a 4.89km super special stage in Ifari Park the same evening. Crews will tackle a pair of special stages twice on Saturday, with the first 51.80km selective getting underway at 10.45hrs and the second, longer 71.67km starting at 12.14hrs. These two timed tests will be repeated on Saturday afternoon.

Action draws to a close on Sunday with a run through a 52.32km stage and a third pass through the 71.67km stage between Mihalyi and Vitnyed. The podium finish will take place in Gyor later that afternoon.

2012 FIA World Cup for Cross-Country Rallies – positions after round 4: 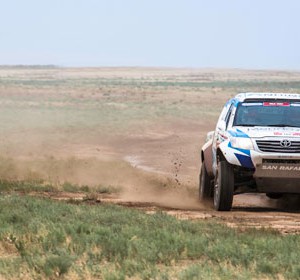 Overdrive Racing has pieced together a last minute agreement to run the Hungarian driver Erik Korda in this weekend’s Baja...
Copyright 2011-2016 Rallyraid.net - RISE Network. All Right Reserved.
Back to top