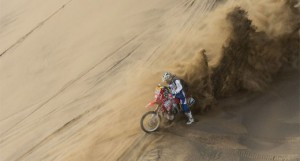 Winner of the Taklimakan Rally, Zhou Tian naturally won the Chinese stage of the Dakar Challenge, and won his registration for the Dakar 2013. Another biker will have this privilege at the end of the week, when the verdict will be out on the 4th round on the Australasian Safari, in Australia.

The search is on for a biker to secure a place on the Dakar. Zhou Tian won his rally registration in January hands down by arriving ahead of the 36 other bikers taking part in the Taklimakan Rally, the third event in the Dakar Challenge this year. Whilst Zhou Jihong, a loyal competitor in the rally who finished 19th last January, dominated the car category, Zhou Tian had to battle it out until the end of the race’s 4000km before savouring his victory. “There were lots of highs and lows before managing to win this race! Now I’m going to have to pull out all the stops for the Dakar,” says Zhou, modestly, who is aiming to become the third Chinese competitor to ride a motorcycle over the finishing line of the Dakar, after Wei Guanghui (2010-2011) and Su Wenmin (2011-2012).

Several thousand kilometres away from the province of Xinjiang, another ticket to the Dakar is the object of desire for 8 amateur riders among the 37 involved in the Australasian Safari. The Australian round of the Dakar Challenge has attracted candidates from America, the Netherlands and South Africa in particular, who will be decided between over seven stages in total, lasting until 29 September. After two days of racing, it is Australia’s Vernon Strange who is leading the field with less than a two-minute lead over Brett Cummings. 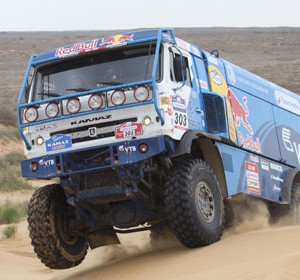 The Team KAMAZ Master is entering on the next Sonangol Africa Race. A return in Africa for this mythical team which proves...
Copyright 2011-2016 Rallyraid.net - RISE Network. All Right Reserved.
Back to top