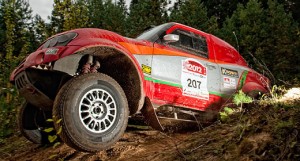 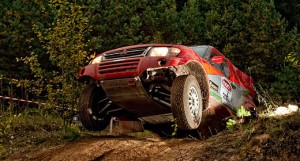 Last 4th and 5th stages will be held on September 23rd at 9:40am and 12:00pm in Viesites off-roads. The official “Riga Baja 2012” awarding ceremony will be at 6:40pm in Jekabpils Vecpilsetas square.

In year 2010, Russian sportsman Boriss Gadasin („Nissan Pick Up”) became champion of „Riga Baja”. He raced under the Russian team flag – „G-Force Motorsport”. With 6 minutes and 30 seconds he was ahead his closest competitor Janis Naglis („RE Autoclub”/„Mitsubishi Pajero”). In third place was Aleksander Mironenko („Nissan Frontier”).

In „Riga Baja 2011”, which began in Riga and next two days continued in Jekabpils, Salas and Viesite surroundings, champion title was won by Russian pilot Aleksander Zheludov („Nissan Frontier”, „Protechsport”). Zheludov was ahead of his closest competitor Bogdan Novicki („G-Force Proto”, „Kievrallyraid”) with 4 minutes and 13 seconds. Best of the Latvian sportsman was Raivis Zeltins with „Mitsubishi Pajero EVO”, who won 3rd place in absolute.

Tracks and dunes await the contenders throughout the 2013 Dakar, but Lima’s beaches will be square one in the South American...
Copyright 2011-2016 Rallyraid.net - RISE Network. All Right Reserved.
Back to top