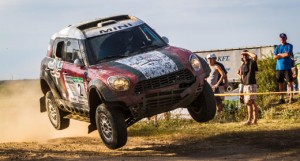 Dubai’s Khalifa Al-Mutaiwei and German co-driver Andreas Schulz will be aiming to defend and extend the driver’s five-point lead in the 2012 FIA World Cup for Cross-Country Rallies, when they tackle this weekend’s Baja Poland in an X-raid-built Mini All4 Racing.

The Fazza Rally Team driver moved ahead of Frenchman Jean-Louis Schlesser in the points’ standings at the Baja Hungary at the end of August and will be hoping to stay in front of the twice Dakar winner and press home his advantage over Poland’s three-day round of the series, which starts in the rural town of Szczecin Bezrzecze on Friday afternoon.

“This is my first visit and participation in Poland, so I will try my best to finish in first position,” said Dubai-based Al-Mutaiwei. “I hope that luck will be on my side more than it was in Hungary recently. My challenge is to make sure that I finish the event still leading the FIA World Cup and, hopefully, having extended my lead over Jean-Louis Schlesser.

“I am now getting much more used to the Mini, especially with a couple of rallies so close together. I know the limits of the car and myself and I am trying to use both to the maximum. In Hungary, the suspension set-up didn’t help, especially over the bumpy terrain. I hope that we find the sweet spots this time and get the maximum out of the package.”

Not only will Al-Mutaiwei face arch rival Jean-Louis Schlesser over the demanding Polish terrain, but the X-raid team has also entered a second Mini All4 Racing for the top Polish driver Krzysztof Holowczyc and his Portuguese co-driver Filipe Palmeiro, a regular competitors with Sven Quandt’s X-raid set-up on the Dakar Rally.

Al-Mutaiwei, the 2004 FIA World Cup champion, will also face stiff competition from recent Baja Hungary winner Boris Gadasin and his Russian team-mate Vladimir Vasilyev and the Czech driver Miroslav Zapletal. A provisional 37 cars will start the international section of the event, although Polish officials are also running a national category for local drivers.

Action gets underway in Baja Poland on Friday evening with the ceremonial start at Soldier Square in Szczecin Bezrzecze at 4.30pm and this will be followed by a 12.70km Prologue stage, starting at 6.20pm.

2012 FIA World Cup for Cross-Country Rallies – positions after round 5:

As a result of the negotiations closed in the past days Sólyom Team MSE has taken on the role as Central European promoter...
Copyright 2011-2016 Rallyraid.net - RISE Network. All Right Reserved.
Back to top