Dubai’s Khalifa Al-Mutaiwei and German co-driver Andreas Schulz extended their lead in the 2012 FIA World Cup for Cross-Country Rallies from five to seven points after finishing sixth overall in a demanding Baja Poland. 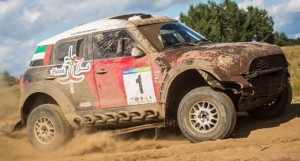 After losing over six minutes to his rivals on Saturday, the Fazza Rally Team driver drove with maturity and caution over the closing stages to ensure that he reached the finish just in front of arch FIA World Cup rival Jean-Louis Schlesser. The Frenchman finished seventh and dropped another two points to the Mini All4 Racing driver, on an event where Poland’s Krzysztof Holowczyc hit the front on the third stage and reached the podium in Szczzecin, 14min 58sec clear of Czech runner-up Miroslav Zapletal.

“This is a new event for me with a lot of new challenges,” admitted Al-Mutaiwei. “No matter what your age and experience, you will always learn new things and new tricks. This is, without question, the hardest of the shorter cross-country events that I have ever done.”

After puncturing in the first stage on Saturday, Krzysztof Holowczyc set the quickest time in the longer of Saturday’s two selective sections and snatched the overall lead from Vasilyev in muddy conditions. The Pole won the stage by 7min 28sec to storm into a 41.6 second advantage. Al-Mutaiwei recorded the seventh quickest time on the stage after losing his way for a short time but, more importantly, he finished the special 2min 18sec in front of rival Schlesser and climbed above the Frenchman in the overall rankings.

Al-Mutaiwei admitted to taking the stage easier than normal to preserve his car and the Emirati was classified in ninth position. But the Mini driver only dropped 37 seconds to Schlesser, climbed to seventh overall when Vladimir Vasilyev suffered engine woes and remained 50 seconds in front of the Frenchman with one stage remaining.

Al-Mutaiwei was beaten by Schlesser by just five seconds in the final stage and duly managed to stay in front of the Frenchman in the overall rankings to extend his lead in the FIA World Cup to seven points. Holowczyc won the stage to confirm the win and Hungary’s Erik Korda was promoted to third overall when Boris Gadasin damaged his gearbox and rear axle on the final stage.

Positions after round 6 (unofficial): 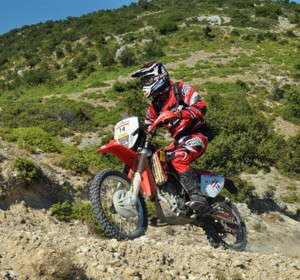