Serres Rally 2012 got underway with the prologue Special Test at Rachovitsa area. Riders and drivers from all over Europe enjoyed a fantastic 17km course which gave photographers and spectators a chance to see the competitors in action. The organization’s helicopter was filming over the Special Test, capturing stunning footage.

The weather was an important ally today, as the sweltering heat from the previous week gave way to cooler temperatures around the low 30 degrees, and the belated starting time of 4pm added some extra welcome coolness to the day. Although dusty and dry, the course was exceptionally fun as most competitors later declared.

Winner of the day’s Special was Italian Christian Pastori on his Sherco 4.5i, in front of his friend Sandro Calesini on a ΚΤΜ 530 EXC. Third today, and first Greek rider, was Michalis Bisbiroulias on a Honda 450 CRF450. Last year’s winner, German Christian Woelfl, came in 4th on a WR 250F, while 5th place went to quad rider Takis Ionas on a Kawasaki KFX 400. Jiri Kalat on a WR 450F came in 6th, and 7th place went to Josef Machacek in his Race Buggy 1000.

The second day of the race unfolds along 320 kilometers and includes 3 Special Tests.

The first long day of the race included 3 Special Tests, and was a strong start to the competition. A total of 320kms, which included some of the best riding tracks of the area around Lake Kerkini. The first Special was 65kms around Sidirokastro, the second Special was 80kms over Mount Belles with a perfect view to Lake Doirani and Kerkini, and the third Special was a little less than 90kms in the perfect “golden” dirt tracks of Krousia. Riders were tested hard, and spectators were rewarded with amazing race views.

Andrea Cosentino won the first Special on his ΚΤΜ 450, while Christian Pastori on his Sherco 4.5i won both the 2nd and 3rd Special Tests, thus taking the lead of the race.

In the overall rankings though, Sandro Calesini moved into 2nd place over Cosentino, and 4th overall went to Marco Grandini on his KTM 530. Austrian Martin Rabenlehner slotted into fifth overall on his large KTM 690RR, while first Greek rider was Angelo Pandelidis on his ten year old KTM 520 in sixth, a few seconds in front of fellow Greek rider Zikos Bafetis on his two stroke Gas Gas EC 300 who placed 7th.

The 3rd day of the race is the notorious Marathon Special Test of 290kms along the mountain range comprised of Bosdakas, Lailias and Angistro mountains. Towards the end of the Special, cars and bikes will separate along two different courses, which will take the bikes along a hard enduro track which made up part of the 2008 ISDE.

The race is by now truly in the minds of the competitors, especially after today’s Marathon stage of over 300kms. Four mountain ranges and over 20kms of continuous altimetric change took them from one edge of Serres prefecture to the other, from Agistro to Menikio and from Faia Petra to Lailias.

A tough and demanding day, which took many riders to the limits of their endurance, and which separated the fast and the strong from the unprepared, while the differences in overall time started to show.

An unlucky day for Italian Sandro Calesini (KTM 530), who -while in the lead- suffered a rear tire issue and had to stop to make repairs. Andrea Cosentino (KTM 450) took advantage and mastered the hard route, making up time over Christian Pastori (Sherco 4.5i) who came in second.

In the overall standings Pastori leads over Cosentino and Grandini, while 4th is still Angelo Pandelidis (KTM 520) who came in 6th on the day’s Special Test and is having an exceptional race.

The 4th day of the race is the longest at 420kms, and extends to the stunning area of Rodopi and the forest of Karadere and the river Nestos. It includes 3 Special Tests, the Orini – Brontou test of 50kms, the Rodopi Special Test of 85kms and the “Water route” of Nestos, also 85kms.

The 3rd Test ends at Prototsani, at the annual Greek Enduro Meeting held there, where riders have a chance to catch their breath before heading back to the paddocks via the day’s last Liaison.

4th Day On the apex of delight…

The 4th and longest day of Serres Rally will be ingrained in the rider’s minds for the spectacular courses that it covered… Every kind of terrain was covered on a route that took the riders over three mountain ranges, both beautiful and demanding, from the forest of Karadere to the plains of Livadero and the mountain of Lailias.

Riders were impressed by the route, admitting that it was probably the best course they had ever raced on! Despite their exhaustion, they ended the 3rd Special with a big smile on their face at the Annual Greek Enduro Meeting at Prototsani in Drama, where they were rewarded with a cold beer and fresh souvlaki straight from the grill.

Sandro Calesini (KTM 530) dominated the day after yesterday’s misfortunes, and despite not winning any of the 3 Specials was overall winner of the day. Christian Pastori and Andrea Cosentino (winner of 2 Specials on the day, 4th overall) both made big navigational errors. Christian Woelfl (WR 250F) finished the day in 2nd, while Vassilis Siafarikas (CRF 250) took 3rd, and showed signs of starting to master the Rally game. Michalis Bisbiroulias (CRF 450), winner of the 2nd Special test, took 5th overall. Marco Grandini came in 6th for the day.

In the classification, Pastori retained his lead over Cosentino but saw it reduced to just 10 minutes. Grandini held on to 3rd while Siafarikas overtook Pandelidis for 4th overall. Woelfl passed into 6th place, just 3 minutes behind Pandelidis.

Quite a few misfortunes befell other riders as well today, some pulling out due to engine failures, others due to tire problems.

The 5th and last day of the Rally is relatively a short one, but includes the first Special of the day at just over 175kms around Lailias, a chance to make or lose a lot of time, and ends with the second Special Test at Rachovitsa, where the Prologue took place.

Despite being the shortest day, it shared one thing in common with the previous four: the smiles on competitor’s faces. The organizational level surpassed all previous years, making a positive impression on even the most experienced riders from abroad -riders who have completed many similar races- and who admitted that Serres Rally’s level was of the highest standards and comparable to International World Championship events.

The first Special around Lailias mountain was an unforgettable riding experience, with Italian Andrea Cosentino (KTM 450) taking 6 minutes over Christian Pastori (Sherco 4.5i) on the day, reducing the difference between them significantly. Third was Sandro Calesini (KTM 530), while Czech Josef Machacek (buggy 1000) had an excellent stage in 4th. Slovenian Anton Zboran (KTM 350) came in 5th, while first Greek was Michalis Bisbiroulias (CRF 450) in 6th, followed by Andreas Glavas (KTM 500) in 7th and Zikos Bafetis (Gas Gas EC 300) in 8th.

The final Special Stage of 17kms was won by Vassilis Siafarikas (CRF 250), his first Special Stage win of the rally and proof that his limited experience but great speed will be a force to be reckoned with in the future. Overall, the day was won by Cosentino who closed the gap to overall classification leader Pastori to one minute!

Despite this, Christian Pastori (Sherco 4.5i) succeeded in being crowned the overall winner of Serres Rally 2012. Luck, experience and skill definitely played their part in this success, as Cosentino tried very fast and hard, but was never able to overcome the 14 minutes penalties from speeding that he gathered on the first day, taking 2nd place at just two minutes behind. Pastori shone throughout the race, a testament to his exceptional skill as a Rally competitor.

Third overall in Serres Rally went to another Italian, Marco Grandini (KTM 530), who won over Vassilis Siafarikas (CRF 250) by 12 minutes, while 16 minutes behind and in 5th place came Angelo Pandelidis (KTM 520) who ran a perfectly consistent race without errors, and retained his position over Sandro Calesini (KTM 530) by only 7 seconds! Calesini lost a lot of time in the last Special test because of rear wheel problems. Christian Woelfl (WRF 250) took 7th place overall, after losing significant time in the first Special of the day, stopping to replenish his strength and rest.

Eighth position went to Andreas Glavas (KTM 500), a remarkable accomplishment for his first Rally race. The next two positions went down to the minute, with Czech rider Jiri Kalat (WRF 450) just winning over 10th place Michalis Bisbiroulias (CRF 450) who impressed with his speed and navigation skills, but was hit by mechanical misfortunes in the race (he finished the 4th day with a bald rear sprocket).

Those are the first ten riders of Serres Rally 2012.

Further down, Josef Machacek was -as always- an impressive competitor on his buggy taking 12th place, while Takis Ionas overcame multiple tire problems, taking his Kawasaki KFX 400 to 18th overall. 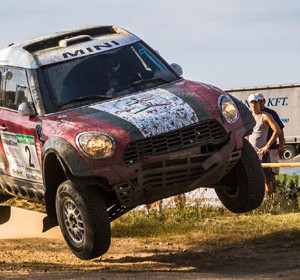 Dubai’s Khalifa Al-Mutaiwei and German co-driver Andreas Schulz will be aiming to defend and extend the driver’s five-point...
Copyright 2011-2016 Rallyraid.net - RISE Network. All Right Reserved.
Back to top