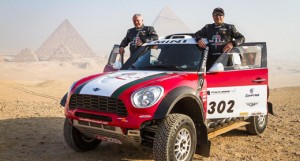 The Fazza Rally Team star began the second loop stage around the Tibniya bivouac with a comfortable 7min 25sec lead over Frenchman Regis Delahaye’s Buggy and, more importantly, the Emirati was over 21 minutes clear of title rival Jean-Louis Schlesser.

But he came under fierce pressure from Schlesser on the special and the Frenchman won the stage to reduce Al-Mutaiwei’s overall lead by 15min 20sec in the unofficial timings. Al-Mutaiwei was provisionally placed third on the special stage behind Frenchman Patrick Sireyjol.

It was imperative that the Emirati stayed clear of trouble on the demanding stage that he began from the front of the car field in his Mini All4 Racing. Al-Mutaiwei was the first driver to reach the first passage control, but he had dropped 2min 26sec to Schlesser and 2min 10sec to Frenchman Patrick Sireyol but maintained a comfortable virtual overall lead. Regis Delahaye, who had been lying second overall at the overnight halt in Tibniya, dropped a further seven minutes behind Al-Mutaiwei.

Schlesser continued to push hard in a bid to reduce Al-Mutaiwei’s lead and the Frenchman – a twice Dakar champion –reached PC2 a mere 52 seconds behind the Emirati after starting the stage six minutes behind. Al-Mutaiwei was content not to take any risks the pair arrived at PC3 separated by just 29 seconds, with the Frenchman running first on the road and Al-Mutaiwei able to follow in his tracks and maintain the pace of the Buggy driver. Sireyol was also running well.

Schlesser held on to take the stage win in his Buggy and reduce Al-Mutaiwei’s overall lead from over 21 minutes to around seven minutes, as Al-Mutaiwei shadowed the Frenchman to the finish.

The Pharaon’s International Cross-Country Rally route heads from Tibniya to Abu Mingar on Wednesday and precedes a fourth loop section around Abu Mingar on Thursday.

The penultimate special forges its way across the desert towards Tibniya on Friday and the final stage on Saturday, October 6th heads from Tibniya to Cairo, where the podium finish will take place in the afternoon. 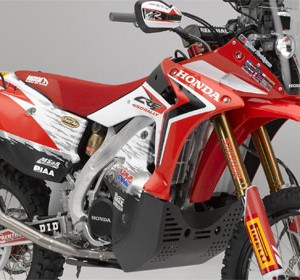 Honda has unveiled its CRF450 Rally model at the 2012 International Motorcycle, Scooter and Bike Fair in Cologne, Germany....
Copyright 2011-2016 Rallyraid.net - RISE Network. All Right Reserved.
Back to top